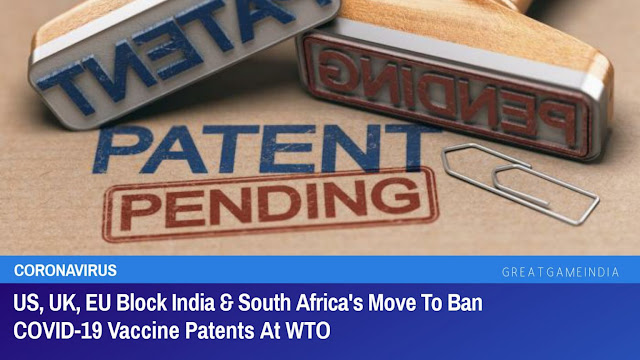 The US, UK and the EU countries have reportedly blocked India and South Africa’s move to ban COVID-19 vaccine patents at the WTO (World Trade Organization). The proposal was vehemently opposed on the grounds that such a ban would stifle innovation at pharmaceutical companies by robbing them of the incentive to make huge investments in research and development.

An IP waiver by the WTO would have made it easier for developing countries to produce COVID-19 vaccines and drugs. Wealthy countries opposed the move, arguing that a suspension of patents would stifle innovation.

The WTO talks on a proposal by India and South Africa to temporarily suspend intellectual property (IP) rules related to COVID-19 vaccines and treatments hit a roadblock on Thursday after wealthy countries balked at the idea, Germany’s dpa news agency reported.

India and South Africa had approached the global trade body in October, calling on it to waive parts of the Agreement on Trade-Related Aspects of Intellectual Property Rights (TRIPS Agreement).

The suspension of rights such as patents, industrial designs, copyright and protection of undisclosed information would ensure “timely access to affordable medical products including vaccines and medicines or to scaling-up of research, development, manufacturing and supply of medical products essential to combat COVID-19,” they said.

The proposal was vehemently opposed by wealthy nations like the US and Britain as well as the European Union, who said that a ban would stifle innovation at pharmaceutical companies by robbing them of the incentive to make huge investments in research and development.

This would be especially counterproductive during the current pandemic which needs the drugmakers to remain on their toes to deal with a mutating virus, they argue.