The Dumbed Down Masses are the Problem

"Not one person has seen me and said, 'He's not wearing a mask. Why am I wearing one?'"

"The vast majority of people refuse to research, see or acknowledge the truth. Are they your real enemies in life?"

THEY'RE BEING ENSLAVED AND DON'T REALIZE IT.

Do you ever feel that your struggle is less against the power-mad pedophile elites than it is against your own people?

You know who I'm talking about. Those brain-addled, mask-wearing friends and family members of yours who refuse to see or acknowledge the truth.

That porn-watching neighbor you exchange greetings with who responds with sarcasm when you comment on or bring up the subject of politics.

That co-worker you sometimes attempt to educate while simultaneously remaining cautious lest they report you to Human Resources. Are they your real enemies in life?

You follow this site and others. You spend countless hours reading, researching, and praying. You're up to date on the state of the world and the endless chain of lies and hoaxes perpetuated on the people of every nation.

Yet when you bring up these subjects with the people you know, they stare back at you with blank faces. Their eyes glaze over and you can almost hear their thoughts: "He's a nutcase!"

That family member then whispers behind your back and tells your parents, siblings and cousins you've lost your mind. That friend stops returning your calls and emails. That neighbor and co-worker go out of their way to avoid you. Are they your real enemies in life? 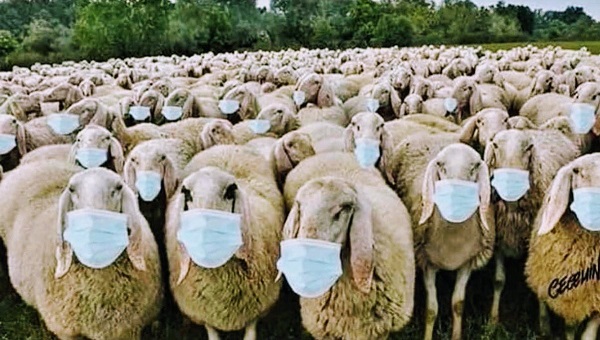 You pass businesses in your neighborhood. Every single one without exception has a sign at the entrance requiring you to wear a mask in order to enter. Every single one has footprints painted on the floor telling you exactly where to stand. Every single one is filled with mask-wearing idiots dutifully following instructions like obedient little pups.

Are they your real enemy?

If others only knew as much as you, the entire virus hoax would not be happening, the stolen election would not be allowed, and life would be so much simpler and easier.

You realize, with a dash of irony, that if others only knew as much as you, THEIR lives would be so much simpler and easier. Almost all of their complaints, their troubles, and their challenges in life would simply disappear.

Yet they stubbornly refuse to research, see or acknowledge the truth. Indeed, they embrace every falsehood.

Are they your real enemies in life?

I keep waiting for someone to stop me on the street and ask me why I'm not wearing a mask.

It's been eleven months now and I'm still waiting. I estimate I've passed over 16,000 mask-wearing people in that span of time (50 people a day over 330 days), not to mention countless cars driving by.

Not one person has expressed an ounce of curiosity. Not one person has seen me and said to themselves, "He's not wearing a mask. Why am I wearing one?" Or maybe they have, but then either fear, stupidity or both has prevented them from exploring the situation further.

Have you ever sent someone an article from this site? What was their reaction? Of all the articles you've sent, what is the percentage of people that responded?  Are any of them still talking to you?

Jesus said, "If they hear not Moses and the prophets, neither will they be persuaded should one rise from the dead."

We don't have Moses today, but we do have a virtual avalanche of information available even with the current state of censorship, de-platforming, and book banning. And still - and STILL - the vast majority of people refuse to research, see or acknowledge the truth. Are they your real enemies in life?

While studying cults in the 50's, the social psychologist Leon Festinger  discovered that cult members could be taught to believe certain things by involving them in activities that suggested a particular belief. The cult members would adopt the belief, suggested by their activities, in order to minimize cognitive dissonance created by conflicting beliefs in their minds.  Festinger gave a doomsday cult as an example. The members would periodically conduct activities in preparation for the end of the world. That end never came but the members nevertheless became more and more convinced that it would, due to their preparations.