An insider using the pseudonym ‘Daniel’, who claims to be from a secret government group called ‘Earth Force’, shared his experiences with Fabio Santos, a Brazilian researcher, who wrote a book about them called Planetary Intervention. According to ‘Daniel, Specialized Elite Earth Forces have provided perimeter support for Nordic extraterrestrials meeting with Earth officials, and battled Reptilian and Grey Aliens over crashed UFOs. Daniel also revealed the long history of Reptilians coming to Earth to hunt and kill humans as part of a secret agreement dating back more than a millennia that mirrors the Predator series of movies.

In the following YouTube video, I interviewed Fabio Santos about Planetary Intervention, and how and why he began researching Daniel’s story. Corey Goode personally met with Daniel and Fabio during a recent visit to Brazil, and introduced me to their information. There are important parallel’s between Daniel and Corey’s testimonies which he mentions in his comments about the interview. More of ‘Daniel’s’ experiences can be read in Planetary Intervention.

Thanks to Corey Goode for setting up the interview.

[Note: In my upcoming February 27, 2021 Webinar, I will be discussing historic intervention by extraterrestrial civilizations in human affairs dating back centuries, and how this is particularly relevant today with an “Earth Alliance” working to free humanity in a global revolution.] 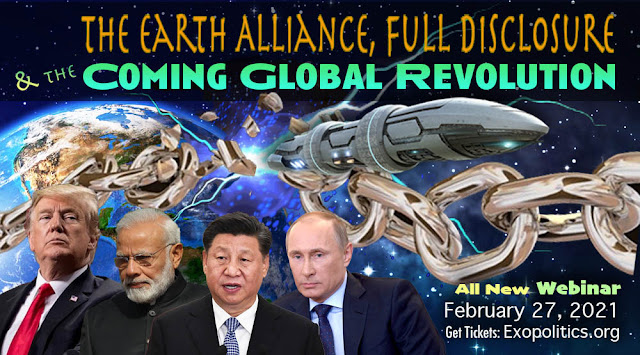 The Earth Alliance, Full Disclosure and the Coming Global Revolution

As the predicted days of darkness temporarily settle in upon the US and world stage, a great effort is taking place behind-the-scenes over the future direction of humanity as many White Hat groups and leaders are stealthily overturning Deep State operations. Among such groups is the Earth Alliance, a loose association of military and political White Hats from major countries who have been battling the Deep State over the extent and pace of releasing advanced technologies used in secret space programs to ultimately reveal the truth about extraterrestrial life.

Very recently, the White Hats gained a decisive advantage due to the widespread public exposure of Deep State plans to socially engineer a Great Reset through systemic election interference, a staged pandemic, social media censorship, and worldwide suppression of civil liberties. The failure of the Deep State’s plans will have major consequences for the repressive political systems of client countries such as China, Iran, and North Korea that were infiltrated decades ago by the Deep State and manipulated.

Key political leaders in the Earth Alliance include President Donald Trump, who has begun the process of releasing advanced aerospace technologies through the creation of the U.S. Space Force. Russia’s Vladimir Putin who has allowed many breakthrough technologies to be released and thoroughly frustrated Deep State plans to incite another World War. China’s Xi Jinping, who has battled the nefarious influence of his predecessor, Jiang Zemin, who still controls many advanced technology projects used to suppress the Chinese populace.

Finally, India’s Narendra Modi has tirelessly worked to bring out into the public arena the antigravity technologies used in ancient India’s space program. These key leaders, along with many others, have been covertly collaborating to bring about the demise of the Deep State both in their respective countries and across the globe.

They are being helped by a positive group of extraterrestrials called the “Galactic Federation” (aka Confederation of Planets), which has been working for decades to raise human consciousness. The Galactic Federation has also been stalwartly working with key players such as the Trump family for generations to promote and ensure the optimal timeline and to bring about a Great Awakening and a Global Revolution that will result in humanity’s emergence as a full member of the Galactic community.

About the Presenter: Dr. Michael Salla is the author of the bestselling Secret Space Programs Book Series & founder of Exopolitics.org

*This LIVE event will be recorded, and attendees are able to watch unlimited replays for 60 days.