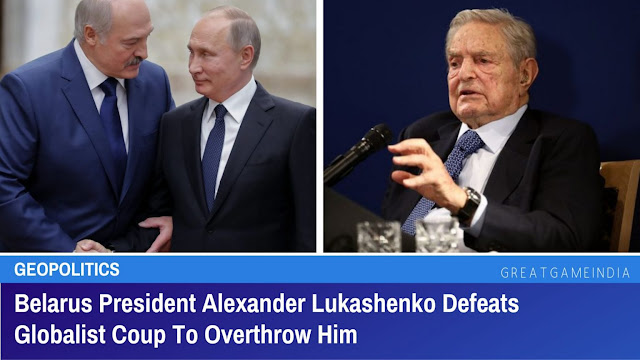 Alexander Lukashenko, the President of Belarus has announced his victory over the coup organized by globalists like George Soros to overthrow him.

During the wave of demonstrations Lukashenko, claimed the protesters had been incited by foreign governments to orchestrate his ouster, and on Thursday he said Belarus had successfully fended off the attacks.

“The blitzkrieg did not succeed. We held on to our country,” Lukashenko said, using language especially resonant in a country that suffered huge losses at the hands of Nazi forces in World War II.

“Despite the tensions in society artificially created by external forces, we survived,” Lukashenko told hundreds of delegates on the first day of the All-Belarusian People’s Assembly.

The protests that broke out in August were the most serious threat to Lukashenko’s rule since coming to power in the ex-Soviet country in 1994.

Since then, Belarus has been a target of constant Color Revolutions aimed at overthrowing Lukashenko.

Last year, in an interview Lukashenko explained the geopolitical importance of Belarus.

Aleksandr Lukashenko stressed that the West needs Russia, not Belarus, which is seen only as a springboard. “The Russian authorities understand very well that Belarus cannot be given to the United States, as it was done with Ukraine. Why cannot this be done? Because it is a sanitary cordon of some 1,000km,” the president said.

He added that when he became the first President of Belarus, he prevented the plans to create such a sanitary cordon of the Baltic States, Belarus and Ukraine, which would separate Russia.

I will not mention the names, you know them. They are still there. Ask Putin how many CIA members were in the government and the Kremlin,” Aleksandr Lukashenko said.

It was in this context that Lukashenko exposed World Bank, IMF and global agencies’ agenda behind huge coronavirus loans.

As reported by GreatGameIndia last year, Belarus exposed the conditions laid by these agencies for loans being provided for COVID-19.

The President of Belarus exposed that the World Bank coronavirus aid comes with conditions for imposing extreme lockdown measures, to model their coronavirus response on that of Italy and even changes in the economic policies which he refused as being “unacceptable”.

The President of Belarus is not the first one to have exposed the pressure exerted by global agencies amidst the coronavirus crisis to further their agenda.

In a shocking development the President of Madagascar made a sensational claim that the WHO offered him $20m bribe to poison COVID-19 cure called COVID-19 Organics made from Artemisia.

It was also revealed in an intercepted human intelligence report that Bill Gates offered $10 million bribe for a forced Coronavirus vaccination program in Nigeria.

Interestingly, Tanzania took the money, then declared the country coronavirus free. Now, the Europeans are venting their anger in the parliament.