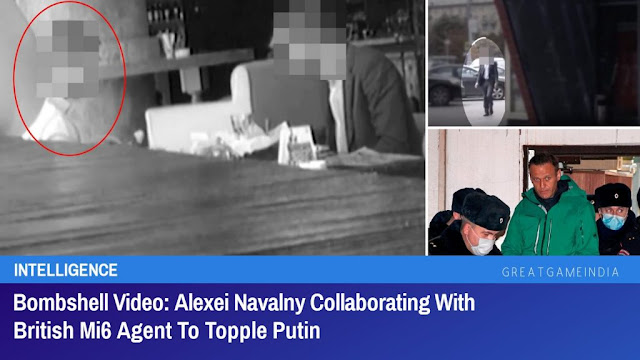 A recent meeting held between a British Mi6 agent and an executive manager of FBK Foundation was captured under surveillance by the Russian counter-intelligence.

The meeting was secretly captured taking place at a table next to these two people meeting at a restaurant at Moscow.

The special report of meeting of these two figures was reported by RTs Murad Gazdiev where their conversations were quite clearly audible.

Mr. Alexei Navalny’s right hand man who is Mr. Vladimir Ashorkov had met the Mi6 agent Mr Ford at a restarant in Mosow .

During the meeting Ashorkov is heard saying:

“If we had more money, we would expand our opportunities of course. A little money…

If somebody would spend, I don’t know…. 10-20 million dollars a year on supporting this, we would see qute a different picture”.

The discussion further states that, “and this is not a big amount of money for people who have billions at stake (inaudible).”

“So thats the message that I am trying to project to my fundraising efforts and talking to people in the business community and so on.”

These back door deals with the elites by such high positioned people often lead to bombarding voters with propoganda and diversion.

In the surveilled video, Mr. Ford does not commit to any direct financial support although Britain has much to gain from this.

Mr. Ford points him to a workaround and to work with Transperency International which is already being financed by Britain.

“We need to play on different chessboards. Mass protests, civil initatives, propoganda, establishing contacts with the elite and explaining to them that we are reasonable people and we’re not going to demolish everything and take away their assets, things like that.”

As reported by RT, “the intelligence desk of Mi6 whose main mission is to gather secret material on the economic and military potential of Russia is actively engaged with the Russian opposition, supports various NGOs and provide them with financing.”

The British Embassy has demonstrated that it is directly involved with assisting the opposition with information and financing opposition organisations.

These incidents are ethical complications as it would undoubtedly be viewed as a security threat and thats what it exactly is in the eys of Russian intelligence.