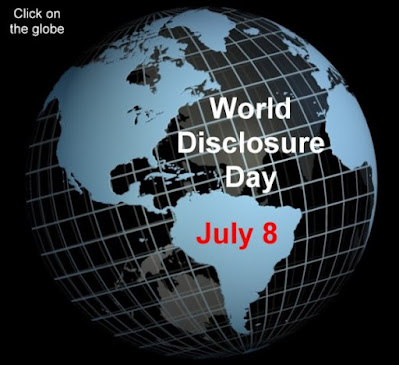 And then there is World Disclosure Day - July 8

"Our Republic and its press will rise or fall together. An able, disinterested, public-spirited press, with trained intelligence to know the right and courage to do it, can preserve that public virtue without which popular government is a sham and a mockery. A cynical, mercenary, demagogic press will produce in time a people as base as itself. The power to mould the future of the Republic will be in the hands of the journalists of future generations." -Joseph Pulitzer

Disclosure in this context refers to the formal acknowledgement by world governments of an extraterrestrial presence engaging the human race, but could well refer to a long list of concerns the truths of which still lie behind walls of secrecy. The purpose of World Disclosure Day is to provide a focal point for people and organizations to come together to assert their right to know and demand cosmic truths being withheld from them by their governments. World Disclosure Day will also help broaden public awareness of the disclosure process and those organizations advocating for the truth on behalf of all citizens.
On July 8,1947 General Roger Ramey held a press event at the 8th Army Air Force Headquarters in Fort Worth, Texas in which he changed the just released story of a recovered crashed disk near Roswell, New Mexico to that of a retrieved Rawin weather balloon. In the view of PRG executive director, Stephen Bassett, "this was the informal beginning of the now 75-year truth embargo regarding the extraterrestrial presence. For this reason in 2011 PRG selected July 8 as World Disclosure Day to 'close the circle' and emphasize the need to reverse that now inappropriate policy."
It's not just about lights in the sky. It's about lies on the ground.
Since 2001, July 2 has been designated as World UFO Day. This date was chosen as it was a suggested candidate for the Roswell, New Mexico crash event. However, the era of the UFO is long over, and now we are in the era of Exopolitics - the political engagement of the past, present and future of extraterrestrial related phenomena. WDD thus completes the historical symmetry with these two dates bracketing the festival celebrated in early July each year in Roswell.
The concept for a WDD in this context was originally put forward by Steve Beckow and Geoffrey West in August of 2010.
Note: WDD is not a prediction that Disclosure will happen on July 8. It is a designated day to draw focus on the issue. Think Earth Day. However, on the day the first nation comes forward to finally and formally acknowledge the extraterrestrial presence, that date will then become World Disclosure Day historically recognizing the most profound event in human history.
https://paradigmresearchgroup.org/exopolitics-world-network/
https://www.exopoliticsindia.in/
https://youtu.be/Wj62Bcvca-w
Posted by SATHYA at Friday, July 08, 2022