Doppler dead for over month, no signal on rain rampage in Telangana 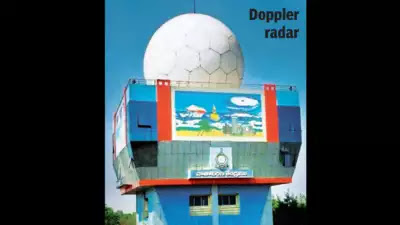 HYDERABAD: Telangana, which enjoys the privilege of having a dedicated doppler from India Meteorological Department (IMD) to cover the state, has not been reaping its benefits this monsoon. The doppler has been defunct for most part of the season at a time when floods have wrecked the state.

The doppler radar has been down since mid June, making it one of the longest spells it has not been operational. A radar transmits radio waves and when these waves hit a rain-bearing cloud, the distance of the cloud and intensity of rain can be gauged.

According to IMD, one component of the radar became fully defunct recently and had to be replaced. The component to be replaced - which is coming from the New Delhi head office - will arrive in the city on Tuesday by air. "The radar is an equipment worth crores and requires very specialised handling. We have been carrying out good maintenance. However, one component got spoilt and replacement took time. The radar should be up and running in three to four days," said K Nagaratna, Scientist E, IMD Hyderabad chief.

The radar is extensively used by GHMC and Disaster Relief Force to warn citizens. Between July 9 and July 15 as well, South and West zones received heavier rain, however this information was not passed on. Meanwhile, a huge convection is forming again for Telangana. From July 21, moderate rains - which will at times be heavy - will occur in state. Mornings may be warm with rains at night.