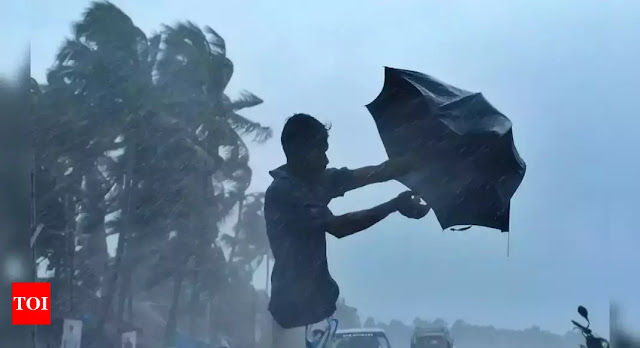 NEW DELHI: After intense spells in south and central India this month, monsoon action could finally be shifting north, including to states with high rainfall deficits and slow pace of kharif sowing so far.

The monsoon trough is moving northwards, the India Meteorological Department said, and this shift is likely to bring widespread rain over the next three-four days to entire northwest India, a region that includes Delhi, Jammu and Kashmir, Himachal Pradesh, Punjab, Haryana, Uttarakhand, Rajasthan and Uttar Pradesh. A two-day red alert for heavy rain has been issued till Wednesday for Uttarakhand.

"The forthcoming spell is likely to last at least till July 23. Of particular importance will be the activity over Uttar Pradesh, Bihar, Jharkhand and Gangetic West Bengal, which have had big rain deficits so far," said Mrutyunjay Mohapatra, head of IMD.

International weather models, however, indicate that the wet spell over the region could last beyond July 23.

While the monsoon across the country has been 12% above normal so far, northwest India currently has a deficit of 9%. There is wide variation within the region, with west Rajasthan showing a "large excess" of 80% while east UP has so far received 72% less rainfall than normal, making it the only subdivision in the country with "large deficiency", or scanty, rains so far.

Overall, while the south has had 37% surplus and central India 33% surplus rainfall in the season so far, the Gangetic states of UP, Bihar, Jharkhand and Bengal have all received deficient rains. This is reflected in kharif sowing data, particularly paddy, where these states have been lagging. For instance, as per the latest sowing data available released on July 15, UP had 26.98 lakh hectares under paddy, over 15% lower than the normal for the period and 24% less than the area sown till the corresponding period last year.

The rain forecast over the next few days could make a dent in these figures.

MIT Study Warns About the Dangers of Geoengineering and Weather Modification

In countless parts of the world lakes and reservoirs are drying up and rivers are running dry. In other regions the entire landscape is being inundated with relentless rains and full time flooding.

Crop production is being crushed from weather mayhem, food supply chains are breaking down.

Covert climate intervention operations are inseparable from all of it, yet the official denial of the ongoing weather warfare continues to be maintained.

The United Nations website posted an essay that discussed "The Benefits of World Hunger", is the truth about the UN finally becoming overt? A US patent outlines a way to cool our planet by detonating nuclear bombs, has sanity completely left the equation?

Can populations be fully awakened in time to make a difference?

The latest installment of Global Alert News is below.