For the limited being all knowledge is bondage 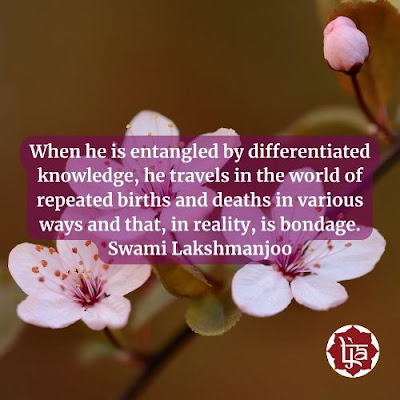 Excerpt from the Shiva Sutras: The Supreme Awakening, Third Awakening, revealed by Swami Lakshmanjoo…
(Continuing the first verse, "What is the individual being?")

(For this limited individual),
all knowledge is bondage.

Depending on the three intellectual organs, intellect, mind and ego, the knowledge found here functions in three ways. The three intellectual organs first understand what is to be enjoyed, then establish that understanding, and finally attach ego to that understanding. And these three intellectual acts are one with (sukha) pleasure, (duḥkha) pain and (moha) illusion. Sukha is connected with the sattvika state of life, duḥkha is connected with the rājasik state of life and moha is connected with the tāmasik state of life. These three states of life are controlled by this limited knowledge of the individual being. Therefore, this kind of knowledge causes you to possess only differentiated knowledge, not undifferentiated knowledge. When he is entangled by these three kinds of differentiated knowledge, he travels in the world of repeated births and deaths in various ways and that, in reality, is bondage.

This is told in Spanda in these one-and-a-half verses,

When the five tanmātras1 give rise to the three intellectual organs, intellect, mind and ego, then collectively there are eight organs. These eight organs are said to be puryaṣṭaka and they function in our dreaming state. This puryaṣṭaka prevents you from getting through to the reality of your self. When the reality of your nature is ignored, then you are dependent on enjoyment which cannot be refused. Because of this, you are played and entangled by the wheel of repeated births and deaths.

Now you will be told how to end this wheel of repeated births and deaths. (Spanda Kārikā 3.17–18)

For an explanation of all the elements (tattvas), see also: "Kashmir Shaivism, The Secret Supreme" by Swami Lakshmanjoo. 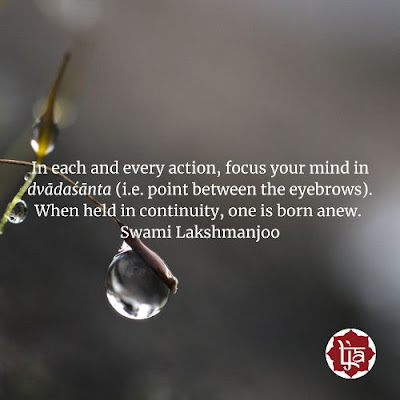 How to be born anew in days, not in months - Kashmir Shaivism

In this excerpt from the Manual for Self Realization: 112 Meditations of the Vijnana Bhairava Tantra, Swami Lakshmanjoo reveals how to be born anew in days, not in months. His advice is one of the major practices of Kashmir Shaivism.

Or, in each and every action, focus your mind in dvādaśānta*. Yathā tathā yatra tatra dvādaśānte manaḥ kṣipet, when you are walking or talking, or doing some household work, or doing any other nonsense act, just concentrate your mind on [any] dvādaśānta. Your mind must hold the state of dvādaśānta in each and every act of your daily routine of life. But this must be held in continuity (pratikṣaṇa). Then, one is born anew. One is born anew in days, not in months. Vailakṣaṇyaṁ dinair bhavet, some days will take place and he will be born anew, he will become new, all-round new.

JOHN: Both fifty and fifty-one are āṇavopāya?

DEVOTEE: How is the area of dvādaśānta found?

SWAMIJI: For instance, I have put the [spectacles] in my case and I am taking it [out]. Just do all these [mundane] actions in that, in that awareness of dvādaśānta. That state must be held in each and every act, in continuity. If [your awareness] remains in continuity, then you will be born anew in days, not in months. Some days will be . . .

JOHN: And the other reading is, “after some time.”

SWAMIJI: In days, in days, not in months. It won’t take a month. In a few days, you will get that bliss.

Yathā tathā yatra tatra, it is not only in the pūjā room, the meditation room. While walking, while doing any absurd things, dvādaśānte manaḥ kṣipet, the mind must be centered in dvādaśānta. Any movement, in any movement, not once, not twice, not thrice, [but] pratikṣaṇa, in continuity you have to put that mind in dvādaśānta. Then kṣīṇa vṛtter, his mind will cease to function. His mind will cease to function altogether and he will become a new man in some moments, or in a few days, not months. Then nothing is to be done afterwards. Then his everything is there.

The state of dvādaśānta is not only between the two eyebrows, [or] only [in the throat pit], [or] only in the heart.

GEORGE: That center, any center178.

SWAMIJI: Bas, you must visualize it. You must keep it in vision and then put your mind breaklessly [there], without a break, then you will become new within days, or within moments.

(Source: Self Realization: 112 Meditations of the Vijnana Bhairava Tantra, revealed by Swami Lakshmanjoo)
Posted by SATHYA at Friday, July 08, 2022