JOIN us for an explosive, fascinating and controversial debate between 3 very different and well-researched public speakers and lecturers; Claire Edwards, Steven Whybrow and John Kitson, joining Age Of Truth TV´s presenter and investigative reporter, Lucas Alexander, for this "Urgent Warning Message to Humanity" the CHECKMATE PROPHECY, on how to change our perception, decode and decipher the encoded secret messages for the world on the front cover of "E c o n o m i s t Magazine" (Dec. 2019 edition) through numerology and gematria. More info to come after the presentation......

NEW POWERFUL, REVEALING, EYE-OPENING Age Of Truth TV featuring JAY K. of the Clapham Saints / Clapham Sect in England. JAY K. is a Numerologist, Word and Symbolism Decoder, Historian and Researcher, who is rather elusive and therefore does not want to be on camera, but his information is fascinating and full of in-depth information. He is gentleman who revealed to us, the hidden occult symbolism behind the front page of the Economist Magazine December 2019 edition that says "THE WORLD IN 2020" and with a mind-boggling amount of letters, words, numbers that he has decoded. This information was presented on AGE OF TRUTH TV via Claire Edwards, Steven Whybrow and John Kitson, filmed on the 8th of September and premiered on our channel on the 28th of September 2020: "CHECKMATE! PROPHECY & URGENT WARNING MESSAGE TO HUMANITY".

JAY K. has finally agreed to be a guest on the show himself, after a telephone call with him and a gentleman surfaced on another channel. Now JAY K. is interviewed and questioned in this hard-talk in-depth interview with Age Of Truth TV Presenter, Investigative Reporter, Lucas Alexander.

JAY K. has an extraordinary backstory and history, being part of the society THE CLAPHAM SECT - THE CLAPHAM SAINTS, and is explaining the story and connection of the distinguished banking dynasty, the Thornton family, and their connection to Captain Cook, Benjamin Franklin and William Wilberforce. He also explains connections with the Illuminati, occult wisdom and numerical aspects of the universe, what is happening in the world 20-20 and the connection to the decoding of the Economist magazine front cover and the New W-orld Ord-Er agenda.

2 insightful and fascinting hours with Jay K. from Clapham Common in the U.K. interviewed by Lucas Alexander. 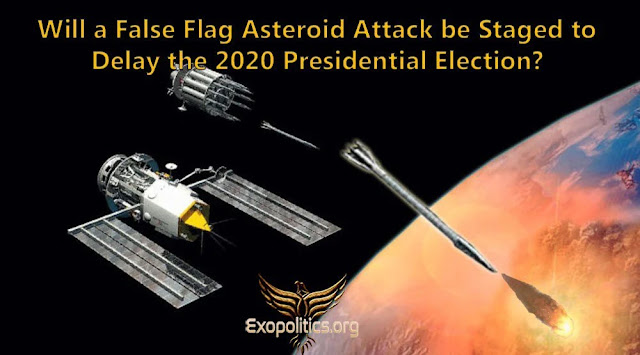 Will a False Flag Asteroid Attack be Staged to Delay the 2020 Presidential Election?