https://youtu.be/JSugSr9Q5yU
The fourth generation warfare is more about being prepared to tackle internal security challenges by the police than facing external aggression by the Army.

Post the World War period, 37 countries have either failed or degraded. Out of these, external aggression resulted in the downfall of only nine countries while the remaining 28 countries failed because they could not manage internal conflicts. East Pakistan, USSR and East Timor are such examples.

The fourth generation warfare is a war to be fought by policemen, they would have to fight against an invisible enemy and their battleground would be the civil society.

This war will be difficult as they (policemen) will have to protect the people too. If you are not able to manage internal security, everything goes. If you win, the country wins and if you lose, the country loses. We will have to tackle issues like cyber security threats and banking frauds.

Be guided by Lord Buddha’s last saying, ‘Aatma Deepobhava’, which means, ‘be your own light’. (Ajit Dovel, India on 01 November 2015)

The civil war between the Trump Administration and the Deep State is a battle between those wanting to  free humanity from an oppressive group of global controllers that has enslaved humanity through its domination of the mainstream media, and political, financial, cultural and religious institutions for centuries, if not millennia.

Today China has been heavily infiltrated by the Deep State which has compromised its leading scientific and military institutions. It’s no accident that the epicenter for the emergence of the COVID-19 virus is China, which the Deep State has been covertly supporting since the Communist Revolution.

If America falls so does the world.
If America falls darkness will soon follow.
Only when we stand together, only when we are united, can we defeat this highly entrenched dark enemy….
We are living in Biblical times.
Children of light vs children of darkness.
United against the Invisible Enemy of all humanity.
Q

It’s clear from examining President Trump’s repeated references to an invisible enemy, and similar references by Q and Archbishop Vigano, that he is referring to the Deep State as the true threat to humanity. An examination of the individuals and groups comprising the Deep State reveals a significant extraterrestrial factor in its origins and operations.

If Trump and White Hats succeed in defeating the Deep State, humanity will have freed itself of an ancient invisible enemy that has manipulated human affairs through contrived global events for centuries if not millennia. We are truly living in biblical times, as Archbishop Vigano asserts, where the children of light are locked in a spiritual war against the children of darkness. 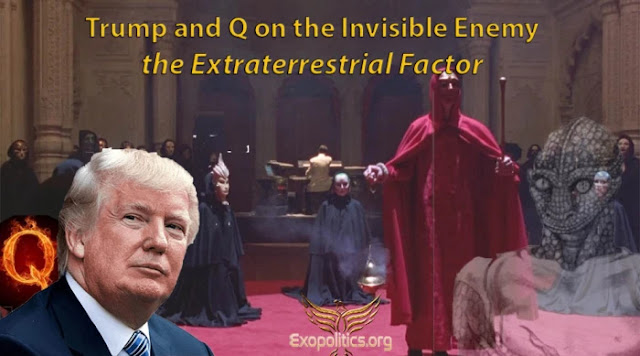 Trump and Q on the Invisible Enemy – the Extraterrestrial Factor