The Illuminati behind the Deep State, a mind-boggling story

The world is close to the final act with the denouement showing the connection between the Deep State Mafia with the Christian Church and the Vatican.

The Illuminati is a secret Order, established by Professor Adam Weishaupt in the year 1771 in the state of Bavaria, in Germany. The Order found itself in deep trouble once Duke Karl Theodor, the head of the state of Bavaria, acted on various damaging rumours being spread about the Illuminati and the Masonic anti-clerical and anti-government teachings. He issued his first edict in 1784 banning all secret societies that were not officially authorised. This total ban included severe penalties for failure to obey his order.

Weishaupt discovered that the power he had achieved over Freemasonry did not comprise real political power. So, the Illuminati was forced to go underground in Bavaria, simply moving its revolutionary efforts elsewhere. The edict did little to deter the Order. Many of the members thought the edict was so general that it didn’t include them. Membership to the Order continued to grow, spreading into France.

When Weishaupt was horseback riding with a fellow member of the order, Friar Johann Jakob, Lanz near Regensburg, lightning struck Lanz and killed him. Lanz must have known about the anti-church position of the Illuminati, which is why some saw this as divine retribution. Sometime later in Lanz’s belongings, important secret writings were found indicating the Order was still active, which infuriated Karl Theodor, who issued another edict requiring all Illuminati members to repent and register with the government or face even more severe punishment. The documents discovered, suggested that Illuminati ideals, under many different guises, would continue to plague humankind well into the future, with the ultimate goal of world domination.

Weishaupt knew how to take advantage of every secret association, past and present, by taking the items he required to wield them into a working system of meticulous efficiency. He copied the doctrines from secret societies such as, the Assassins, the Jesuits, the Templers, and the Freemasons and combined these with the philosophy of Machiavelli, and the mystery of the Rosicrucian. He enlisted the appropriate elements of all the existing associations, as well as isolated individuals, to mould them to his purpose. As an example of the mindset of the Illuminati, and the Jesuits, here an excerpt of the Jesuit Oath:

“You have been taught to insidiously plant the seeds of jealousy and hatred between communities, provinces, states that were at peace, and incite them to deeds of blood, involving them in war with each other, and to create revolutions and civil wars in countries that were independent and prosperous, cultivating the arts and the sciences and enjoying the blessings of peace. To take sides with the combatants and to act secretly with your brother Jesuit, who might be engaged on the other side, but openly opposed to that with which you might be connected, only that the Church might be the gainer in the end, in the conditions fixed in the treaties for peace and that the end result justifies the means.”

Many researchers claim that this has helped to protect the descendants of the Illuminati even today. It made it difficult for observers to believe that such a well-organised conspiracy could exist, and that the goals they envision for the world are real. This disbelief by the public is what fuels their success and it befits the conspiracy to plan their moves in such a way that the truth becomes so incredibly unbelievable, so preposterous that no one would believe that it was intentionally created. Through these means they have become the Money Power of Western civilisation and Asia, amassing over the centuries, untold wealth and material treasures. Because of their insatiable greed; their hunger for wealth and power is never satisfied and is the driving force of their organisations to this day. Henry Makow wrote once:

“History is unfolding according to the Illuminati’s long-term plan. Wars are plotted decades in advance and orchestrated to achieve the destruction of nations, depopulation, demoralisation, and of course, power and profit.” The super rich have organised themselves into a Satanic cult to prey on mankind and establish their permanent hegemony. Put yourself in the Central Bankers’ shoes. The nations of the world owe you trillions based on money you printed for the cost of paper and ink. The only way to protect this ‘investment’ is to establish a thinly disguised dictatorship, using sophisticated methods of social and mind control. This is the true meaning of the ‘War on Terror’.  It is not directed at ‘Muslim terrorists’. It is directed at you and me.

The extremely wealthy elite having organised themselves into a “Satanic cult” to make prey of mankind and establish their permanent hegemony over the entire Globe.” 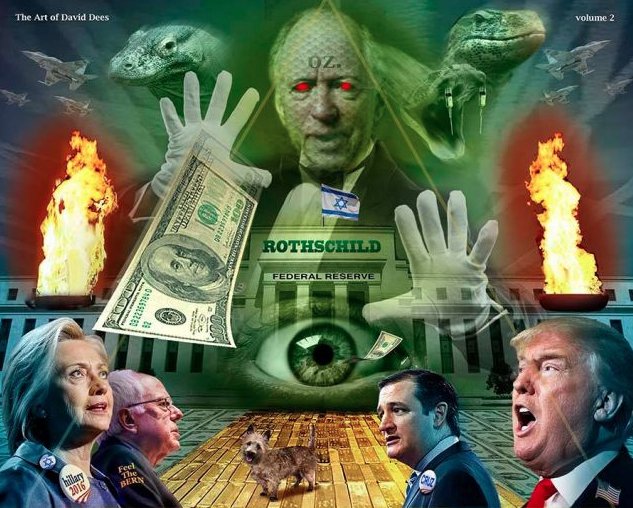 The Illuminati is a secret society within secret societies, supported by a banking elite, led by the Rothschild Dynasty, advancing a plan of abolishing religion and overturning civil governments to centralise everything under their control, in essence the New World Order.

Read more about this development here.

For an all-round understanding it is important to view below video from a several decennia long expert researcher on this subject: Jordan Maxwell gives his presentation of Order out of chaos, as briefly is described above.

Jordan Maxwell-Order out of chaos