Want the REAL reason governments want us locked-down at home?  It isn't COVID. TWO YEARS AGO, they became aware of inbound Gamma Ray Bursts heading on a collision course with earth.

They are inbound from the Vela Constellation (a southern hemisphere constellation) and, according to Scientists, they are usually preceded by a gravity wave.

The amount of energy contained in a large Gamma Ray Burst is so huge, the narrow beam-like configuration of a Gamma Ray Burst contains 1/2000th of the TOTAL energy of our Sun!  Between the actual energy of the Gamma Ray Burst, and the effects of the Gravitational Wave preceding it, if/when they hit earth, could result in earthquakes, tsunamis, torquing of Earth's Magnetic Poles, and even (possibly) an Extinction Level Event.

In his 1983 Ph.D. dissertation, Paul LaViolette called attention to terrestrial dangers of Galactic core explosions, pointing out that the arrival of the cosmic ray superwave they produced would be signaled by a high intensity gamma ray burst which would also generate EMP effects. He also noted that a strong gravity wave might be expected to travel forward at the forefront of this superwave and might be the first indication of a superwave's arrival. He pointed out that such gravity waves could induce substantial tidal forces on the Earth during their passage which could induce earthquakes and cause polar axis torquing effects.

[Please note, the gravity potential gradient associated with a stellar explosion or core explosion would drop off in intensity inversely with distance traveled (according to 1/r), and would not drop off as the inverse cube of distance as some have claimed on the internet. That is, it does not have a force-distance dependence similar to the lunar tidal force. So the impact would be quite significant.

In his book Earth Under Fire (as well as in his dissertation), LaViolette presents evidence showing that the superwave that passed through the solar system around 14,200 years ago had triggered supernova explosions as it swept through the Galaxy. Among these were the Vela and Crab supernova explosions whose explosion dates align with this superwave event horizon. He points out that these explosions could be explained if a gravity wave accompanied this superwave, it could have produced tidal forces which could have triggered unstable stars to explode as it passed through.

He wrote at a time when gamma ray bursts had just begun to be discovered, and when no one was concerned with them as potential terrestrial hazards. In recent years scientific opinion has come around to adopt LaViolette's concern, as can be seen in news articles discussing the SGR 1806-20 gamma ray outburst, e.g., see Space.com news story. They note that if this gamma ray burst had been as close as 10 light years it would have completely destroyed the ozone layer.

By comparison, the Galactic superwaves LaViolette has postulated to have been generated as a result of an outburst of our Galaxy's core and to have impacted the Solar system during the last ice age would have impacted the solar system with a cosmic ray electron volley having an energy intensity 100 times greater than this hypothetical 10 light year distant stellar gamma ray burst. In comparision, SGR 1806-20 has been estimated to have a stellar progenitor mass of 150 solar masses, whereas our Galactic core has a mass of 2.6 million solar masses. In its present active phase, SGR 1806-20 is estimated to have a luminosity 40 million times that of the Sun, whereas during its active phase the Galactic center could reach luminosities of 400 trillion times that of the Sun.   Any living creature hit with that would instantly be wiped out.  So it is understandable that if the Galactic center were to erupt, it would produce a gamma ray burst and a gravity wave far more intense than the outburst from this star.

Scientists now agree:  If anything, the December 27, 2004 gamma ray burst shows us that we do not live in a peaceful celestial environment. And if the December 26th Sumatra earthquake was in fact part of this same celestial event, we see that this stellar eruption has claimed many lives (240,000 from Tsunami, in ONE DAY). For this reason, it is important that we prepare for the possibility of even stronger events in the future, the arrival of superwaves issuing from the core of our Galaxy. Like the December 26th earthquake and the December 27th gamma ray burst, the next superwave will arrive unexpectedly. It will take us by surprise.

OBSERVATORIES SHUT DOWN Three years ago, in October, 2017, scientists were able to actually OBSERVE the collision of two neutron stars. 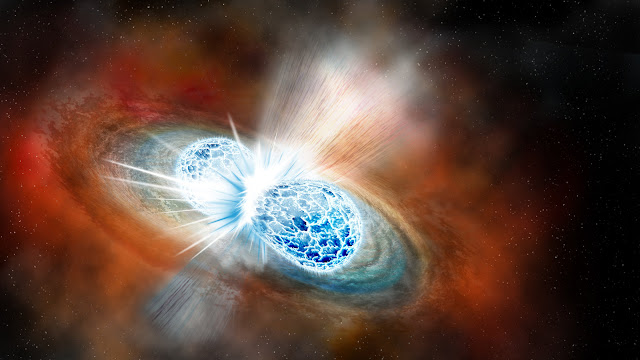 Here is what NASA's Satellites are now detecting...