We’re living in a moment when there is a bombardment of media information.  People are confused by the plethora of information. Whom should they believe?  Facts are spun to present a particular narrative. Who can be trusted?  One thing to remember, is that the mainstream media is produced, and has largely been broadcast over the years on “Tell A Vision.” We watch “programs.” The media use programming to control the narrative … and minds.

History is written by the victors. What’s important to understand is that there is a carefully orchestrated organization behind much, if not all, of the media narrative.  It is not random entertainment.  From a United States perspective, there has been a consolidation of media, so that there are now only six major media corporations. That is quite a narrow lens from which we receive our information. 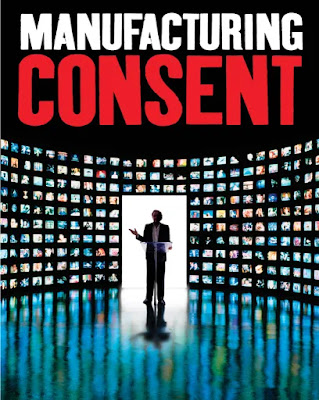 This series will ask these types of questions that at the very least we need to consider. Researching is an intelligent pursuit.  Seeking truth is necessary. Exploring different avenues and narratives is an intellectual imperative – if only to “debunk” a theory.  Theories in themselves are good things.  Einstein theorized on relativity until he could prove it. Newton theorized on gravity until he had his equation. From questioning things, comes enlightenment, and is the basis of scientific method.

Let’s quickly look at how the media operates, by taking a look behind the curtain. Here are their rules:

1. Lying by omission– What isn’t being shown on nightly news is generally more important that what is.

2. Control the debate– Who is arguing and for what cause? Most commentators are vetted with accepted points of view.

3.Newscasters are groomed to play the game– Getting a network anchor spot isn’t achieved by merit alone, but by which narrative you will support. There’re only six corporations that own all media outlets – they protect themselves.

4.Scripting and Synchronizing the News– Anchors often read the “news” verbatim from city-to-city, station-to-station. What? They don’t have journalists anymore?  Not so much. Just people who read the news that look good on TV and get paid very well to do it.

5.Politicize Everything– Everything is calculated to further the Controllers divide and conquer tactics. Conservatives vs. Liberals. Democrats vs. Republicans. Right-wingers vs. Left-wingers. Left vs. Right. Whites vs. Blacks.

6.Label Everyone– No one is a human being anymore, now, everyone is a label. You are a ‘conspiracy theorist’ if you question the official narrative. Remember Bernie the Socialist, Trump the Reality Show Actor, Clinton the First Woman Presidential Candidate. Sleepy Joe Biden.

6.Ask the Wrong Questions and Answer Questions that Weren’t Asked – Have an interview on current topics but ask irrelevant questions and get into an argument while avoiding any real issues.

7.Closing the Book Too Soon– The jury may still be out on an issue, but the media makes up its mind as soon as they can to fit their narrative.

9.Outright Lying– When all else fails, just make it up. There will be another network anchor to back you up.

10.Attack, Attack, Attack– Your point of view isn’t so good? Accuse your opponent of what you would do or have done. These lines of attack show just how the attacker might think. Give your opposition a label such as “conspiracy theorists” or say they are crazy to make them look bad.

11.Wear ‘Em Out– Outlast your opponent.

Now what is the objective? Simple: Propaganda.

The power of Television - Mind control

There’s always more to the story as we’ll try to show you. We bring this up, because we are in a blitzkrieg of informational warfare. Simple as that. We are at war. The war is for your consent. The war is for control of what the elite owned media and their financial elite buddies desire. Their aims are the same as Cecil Rhodes’ over a century ago: control over the slaves.

So get ready to dive into deep information. Bring an open mind. Truth has a resonance. You’ll learn a new perspective to challenge the narrative. We are Prepare for Change have been reporting and presenting this information for almost a decade. We gather the information from high level sources and have thousands of articles online at Prepareforchange.net.

Our site isn’t for everyone. It is intended to help those who question the narrative or want to explore history or challenge the mainstream. We are often paddling our boat up that mainstream.

But due to the many hundreds of great writers who’ve lost their jobs in the media consolidation, the information is out there. The truth is best hidden in plain site. We strive to show you how to sort through it. With a sound basis in history and through whistle-blowers, intelligence agents, and reporters who sometimes make the ultimate sacrifice, we have tons of support to stand on.

The time is critical to make this series that will bring together the methods, the actors, the religious beliefs, and the stories to put a spotlight on darkness and provide some sense from the Planned Chaos.

Find other support articles at: PrepareForChange