The magnetic field and electric currents in and around Earth generate complex forces that have immeasurable impact on every day life.

The field can be thought of as a huge bubble, protecting us from cosmic radiation and charged particles that bombard Earth in solar winds.

It's shaped by winds of particles blowing from the sun called the solar wind, the reason it's flattened on the "sun-side" and swept out into a long tail on the opposite side of the Earth.

Although invisible to the eye, Earth's magnetic field plays a huge role in both keeping us safe from the ever-present solar and cosmic winds while making possible the opportunity to witness incredible displays of the northern lights.

Like a giant bar magnet, if you could sprinkle iron filings around the entire Earth, the particles would align to reveal the nested arcs of our magnetic domain. The same field makes your compass needle align north to south. 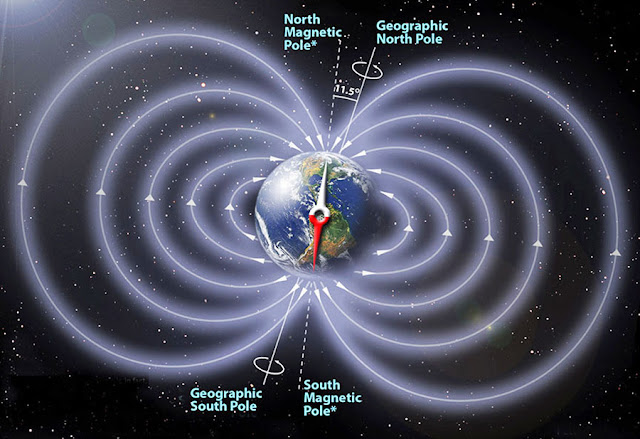 Illustration of the invisible magnetic field lines generated by the Earth. Unlike a classic bar magnet, the matter governing Earth's magnetic field moves around.

The flow of liquid iron in Earth's core creates electric currents, which in turn creates the magnetic field.

We can picture our magnetic domain as a huge bubble, protecting us from cosmic radiation and electrically charged atomic particles that bombard Earth in solar winds. Satellites and instruments on the ground keep a constant watch over this bubble of magnetic energy surrounding our planet.

For good reason: it's always changing. 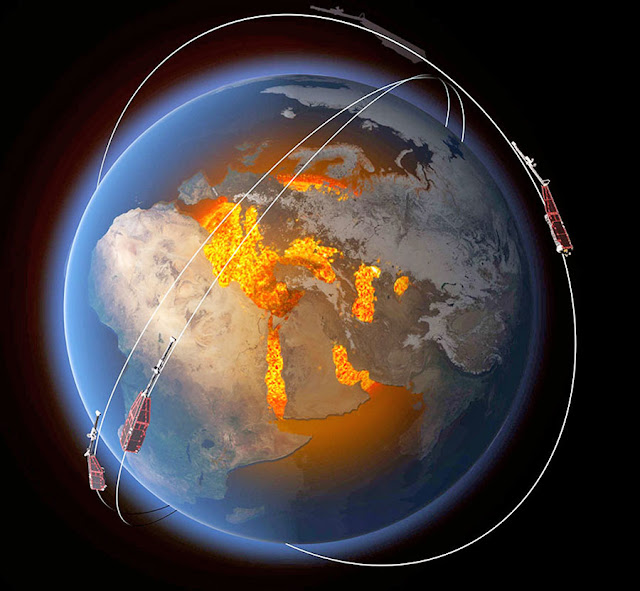 Earth's magnetic field is thought to be generated by an ocean of super-heated, swirling liquid iron that makes up its the outer core 1,860 miles (3000 kilometers) under our feet.

Acting like the spinning conductor similar to a bicycle dynamo that powers a headlight, it generates electrical currents and a constantly changing electromagnetic field.

Other sources of magnetism come from minerals in Earth's mantle and crust, while the ionosphere, magnetosphere and oceans also play a role.

The European Space Agency's Swarm satellite trio, launched at the end of 2013, has been busy measuring and untangling the different magnetic signals from Earth's core, mantle, crust, oceans, ionosphere (upper atmosphere where the aurora occurs) and magnetosphere, the name given to the region of space dominated by Earth's magnetic field.

At this week's Living Planet Symposium in Prague, Czech Republic, new results from the constellation of Swarm satellites show where our protective field is weakening and strengthening, and how fast these changes are taking place.....

Further results are expected to yield a better understanding as why the field is weakening in some places, and globally.

We know that over millions of years, magnetic poles can actually flip with north becoming south and south north. It's possible that the current speed up in the weakening of the global field might mean it's ready to flip.

Although there's no evidence previous flips affected life in a negative way, one thing's for sure.

If you wake up one morning and find your compass needle points south instead of north, it's happened.

READ MORE
Is Earth's Magnetic Field Ready to Flip?
Posted by SATHYA at Monday, May 30, 2016