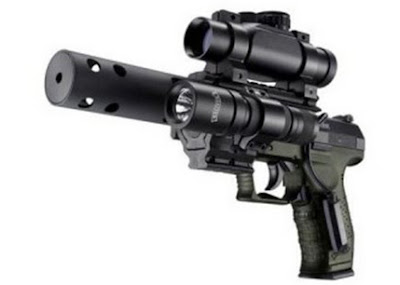 As you’ll learn from the video above, the CIA has been using a heart attack gun for years. What you see in the video is a congressional meeting dating back to 1975. In it, politicians discuss the CIA’s use of the secret heart attack gun. Only recently did this information become declassified, and Your News Wire somehow dug up this video all about it.

The way the gun works is that it shoots a tiny dart that can pierce through clothing and leaves no trace. But it causes a heart attack only seconds later. No, this is real life, not a James Bond flick!

The dart, which is laced with poison, disintegrates after piercing the skin before the person shot has a heart attack.

Again, the video you need to watch is from 1975, so we can only imagine what kinds of technology the CIA has come up with since then.

As for the use of the heart attack gun now, according to conspiracy theoriests, the inexplicalbe death of 52-year-old Mark Pittman, a reporter who predicted the recent financial crisis and exposed Federal Reserve misdoings, is the work of this CIA weapon. Pittman fought to open the Federal Reserve to invesitgations. He led Bloomberg News to sue the powerful central bank and win. Pittman died of a heart attack on Nov. 25th, and many say he was perfectly healthy and that he was ‘taken out’ by CIA.

Regardless of what you believe, there are no two ways about the fact that a heart attack gun exists, the CIA has used it for nearly three decades and it works. Again, if you doubt it, just watch the video.
Posted by SATHYA at Sunday, May 01, 2016