Raging forest fires in Uttarakhand could have a devastating effect on the state's glaciers which are the lifeline of the major rivers flowing through India's northern plains. According to experts at Nainital's Aryabhatta Research Institute for Observational Sciences (ARIES) and Govind Ballabh Pant Institute of Himalayan Environment and Development (GBPIHED) in Almora, `black carbon' from the smog and ash is covering the glaciers, thereby making them prone to melting.

Elaborating on what he termed a `long lasting effect' of the fires, Manish Kumar, a senior scientist at the atmospherics department in ARIES, told TOI, “Black carbon is formed by the incomplete combustion of fossil fuels, biofuels and biomass. It absorbs light and increases heat, which is why it can cause glaciers to melt faster.“ Water in the rivers which originate from these glaciers also stand to get heavily polluted by harmful particles and compounds that constitute black carbon, Kumar said.

According to experts, forest fires have already resulted in a jump of 0.2 degrees Celsius in temperatures across northern India which can have a detrimental effect on the monsoons. “Black carbon floats in air for a long time and gets deposited on clouds interfering with the normal cycle of the monsoons,“ said Kirit Kumar, a scientist from Govind Ballabh Pant Institute of Himalayan Environment and Development, Almora. Other experts, however, said the interaction of black carbon with clouds was complex and could have varied effects.

The glaciers which are most at risk, according to Kumar of ARIES, are those that are situated at relatively low altitudes such as Gangotri, Milam, Sundardunga, Newla and Cheepa, which are also the source of many rivers. In order to study the effect that the fires are having on these glaciers, a team of scientists from GBPIHED would soon undertake a scientific trip to these heights. 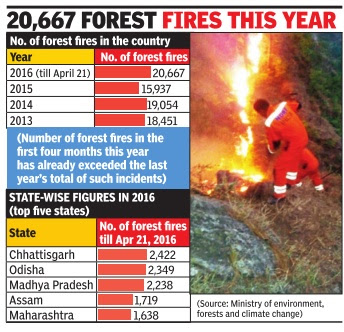 The Uttarakhand forest fire is turning out to be a largely man-made disaster which has so far caused damage worth over Rs 2,500 crore with reports that a nexus of villagers and timberland mafia could be behind the blaze.

A preliminary fact-finding report suggested that the fire started following the routine burning of fallen leaves and forest areas by villagers so that they can grow grass and fodder for their livestock. But the controlled act went out of hand due to the hot weather and dry vegetation and the villagers could not douse the fire before it engulfed a larger area.

“We need to find out whether the villagers could actually not control the fire or some of them did it deliberately in collusion with the timber mafia,“ an official said. A team of experts has reached Uttarakhand to ascertain the cause of fire and extent of damage.

Fours persons have been arrested for starting fires in Pauri Garhwal. “Their role will be probed and action will be taken accordingly,“ environment minister Prakash Javadekar said on Monday. Refusing to comment on the possible involvement of the timber mafia, the minister said a probe had been ordered and the culprits would be brought to book. “Not a single inch of forest land will be allowed to be encroached by anybody,“ he said.

Builders are keen to get forest land cleared so that they can go ahead with their expansion plan on encroached land.They take villagers on board and also take the timber mafia along as part of a bigger nexus. “Since it cannot happen without the help of forest officials, the probe will also look into their roles, if any, in the disaster,“ an official said.

Uttarakhand's forests have many varieties of commercially viable trees like sal, oak, acacia and conifers. Since fire usually damages only the lower portion of trees, the upper portion can be used. Before this fire, till April 21, the state had reported 291 forest fires.

“The Centre is taking the fires very seriously. Over 6,000 people have been deployed. We have also granted Rs 5 crore to the state,“ Javadekar said.

The matter was also raised in Lok Sabha, to which home minister Rajnath Singh said that the Centre had brought the fire under control.