Will the real president of the United States please stand up? 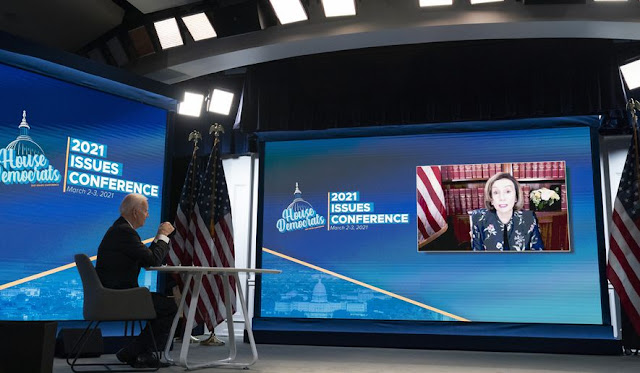 (President Joe Biden listens to House Speaker Nancy Pelosi of Calif., during a virtual meeting with the House Democratic caucus in the South Court Auditorium of the Eisenhower Executive Office Building, on the White House complex, Wednesday, March 3, 2021, in Washington)

Can anyone just tell us who the hell is running our federal government right now?

You literally get censored out of existence for suggesting that anyone other than Joe Biden won the election last November. Yet there is no evidence today — four months later — that Mr. Biden is actually serving as president.

A weird Tron video this week appeared to show Mr. Biden — looking every bit the part of Max Headroom — interfacing with House Democrats in Congress. Digitally, of course.

He droned on for a few minutes using scripted psycho-pablum, sitting alone at a table. The table was empty except for his instruction manual. As he spoke haltingly, he looked up at a giant screen from which House Speaker Nancy Pelosi stared awkwardly, fake smiling.

One could imagine the Dem droids watching from somewhere in the cybersphere nodding along obediently.

The digital president then opened the floor for questions.

“I’m happy to take questions,” he said, pretending for a moment to actually be the leader of the free world.

“If that’s what I’m supposed to do, Nance,” Mr. Biden added, using his bizarre nickname for the smiling droid staring down at him.

“Whatever you want me to do,” he added meekly.

Even more alarming than his failure to display proper subservience was the notion that Mr. Biden had offered to allow questions and possibly even answer them.

The Overlords were not pleased.

They immediately issued a long censorship “beep.” Then the Overlords cut away from the video of the man claiming to be the leader of the free world and replaced it with a test pattern of colored bars.

There would be no questions. And certainly no answers.

Just a few days before, someone claiming to be the American president bombed Syria. The bombing was followed by a report out of the White House that Vice President Kamala D. Harris was not included in the decision to bomb Syria and that she was very displeased with the decision.

That may or may not rule out Ms. Harris as the person who is operating the federal government right now. Certainly, it seems to suggest she is, in fact, not currently the president.

Either way, it doesn’t answer the pressing question we all deserve to have answered.

Who is the president of the United States right now?

• Charles Hurt is opinion editor. He may be reached at [email protected]washingtontimes.com.