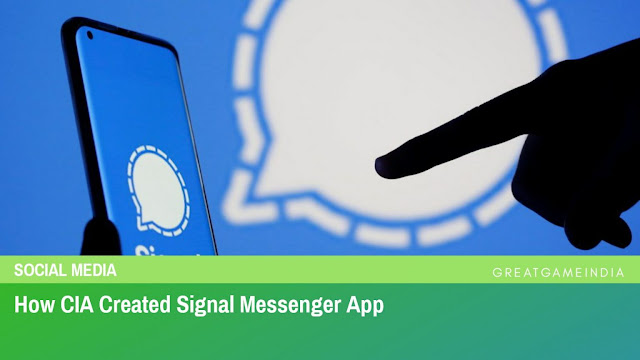 Recently, after WhatsApp threatened to change its privacy policy, people were nuged to the alternate Signal messenger app. However, serious discussion of Signal’s history, and funding sources, has been entirely absent from the puff pieces by media. This investigation reveals how CIA created the Signal app, funded by the US government to protect communications of its agents deployed for regime change.

OWS never published financial statements or disclosed the identities of its funders at any point during its operation, although the sums involved in launching and maintaining a messaging platform used by a vast number of people internationally over several years were surely significant.

Rosenfeld alleges the app “never [took] VC funding or sought investment” at any point during that time, and quite how much money was involved in total is a mystery.

It’s clear though that at least $2,955,000 was provided by the Open Technology Fund (OTF) 2013-2016, and the organization’s website refers to Signal being “originally developed with OTF funding.”

The site is also home to a dedicated OWS profile, which boasts of how the OTF “enabled the OWS team to continue providing Signal at no cost around the globe and adapt their operations for a growing user base.”

The OTF was created in 2012 as a pilot program of Radio Free Asia (RFA), an asset of US Agency for Global Media (USAGM), which is in turn funded by US Congress to the tune of $637 million annually.

In August 2018, its then-CEO acknowledged the outlet’s priorities “reflect US national security interests.”

The station formed a key part of this effort, along with Radio Free Europe and Radio Liberation From Bolshevism, later Radio Liberty – it broadcast unrelenting propaganda in China, North Korea, Vietnam and elsewhere.

In 2007, the CIA’s official website stated these “psychological warfare” initiatives were among “the longest-running and successful covert action campaigns” the US ever mounted.

After the CIA’s role was made public in the 1970s, Congress took over running and funding the stations, before in 1999 they were grouped along with other state-run media entities under the umbrella of the Broadcasting Board of Governors, USAGM’s forerunner.

The launch of the OTF followed the US State Department, then led by Hillary Clinton, pursuing an “Internet Freedom” policy, ostensibly an effort to develop tools to subvert restrictive internet policies.

However, an extensive June 2011 New York Times investigation pointed to a far darker raison d’etre, concluding that the endeavor was in fact an effort “to deploy ‘shadow’ internet and mobile phone systems dissidents can use to undermine repressive governments.”

Among these assets were State Department-funded “stealth wireless networks,” which would enable activists “to communicate outside the reach of governments in countries like Iran, Syria and Libya.”

Reinforcing this conclusion, in February 2015 Jillian York, director of the International Freedom of Expression at the Electronic Frontier Foundation and an OTF advisory board member, stated that she “fundamentally” believed Internet Freedom was “at heart an agenda of regime change.”

It may be no coincidence that Signal founder Rosenfeld previously created encrypted communications programs TextSecure and RedPhone, both featured in a March 2013 Gizmodo guide, “Which Encryption Apps Are Strong Enough to Help You Take Down a Government?”

US Agency for Global Media (USAGM)

USAGM is moreover evidently extremely proud of Signal, an official factsheet published November 2019 giving the app top-billing in a list of “tools supported by OTF.” The agency might be, given how popular it has become with dissidents overseas, including those in countries and regions of intense interest to Washington.

For example, Signal became the messaging platform of choice for protesters in Hong Kong after its launch, just as the National Endowment for Democracy, the US government regime-change arm, greatly increased its direct and indirect support and promotion of activists and activist groups there.

In an unexpected twist, in June 2020 funding for a number of USAGM projects was unexpectedly frozen, including OTF plans to directly aid protesters in Hong Kong, just as the administrative region prepared to implement a highly controversial and much-contested national security law.

One was the creation of cybersecurity incident response teams to analyze Chinese surveillance techniques in real-time during demonstration, and share relevant information directly with developers of secure communications apps, in order to circumvent crackdowns and restrictions.

Another shelved initiative was a $500,000 rapid response fund in support of anyone subject to “digital attack” by authorities.

Still, the next month Signal became the most-downloaded app in Hong Kong, the app’s official Twitter account resultantly boasting that unlike competitor Telegram, which had just announced it would cease cooperating with authorities’ requests for user data, “we never started turning over user data to HK police.”

Excerpts from report by Kit Klarenberg for RT. Kit is an investigative journalist exploring the role of intelligence services in shaping politics and perceptions.