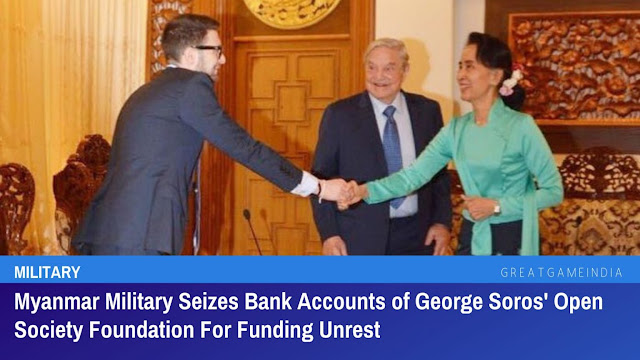 The Myanmar military regime has seized the bank accounts of billionaire George Soros’ Open Society Foundation (OSF) for fomenting unrest in the country by funding massive protests. An arrest warrant had been issued for 11 OSF members on suspicion of funding protests against the military junta.

The military-controlled MRTV made an announcement on Monday. An arrest warrant had been issued for 11 OSF members on suspicion of funding protests against the military junta. These arrests would be on suspension of controversial NGO passed funds to opponents of a Feb. 1 coup.

The IMF sent $350 million in cash to the Myanmar government just days before the military coup as part of an emergency aid package to help the country tackle the COVID-19 pandemic.

The money was sent days before Myanmar’s State Counsellor Aung San Suu Kyi and other senior figures from the governing National League for Democracy were arrested in an early morning raid on Monday in the capital Naypyitaw.

The OSF is also accused of withdrawing $1.4 million illegally. This money was withdrawn from organization’s account at SMED 7 days after military takeover in Mynmar.

The military said “it would take legal action against SMED for allowing OSF to deposit $5 million and withdraw $1.4 million without obtaining approval from the CBM.”

OSF has refuted the allegations.

“Claims of financial misconduct, including that OSM acted illegally by withdrawing their own funds in local currency from the SMID bank, are false,” Open Society Foundations said.

As reported by GreatGameIndia, a three judge court in Peru has ruled that the COVID-19 pandemic was started by the billionaires Bill Gates, George Soros and Rockefeller.

Despite the ruling, “fact-checkers” concluded that the Peruvian court had no evidence to make such a judgement citing declaration from the WHO and CDC who have lost all its credibility.