Meddling with the internal affairs of India 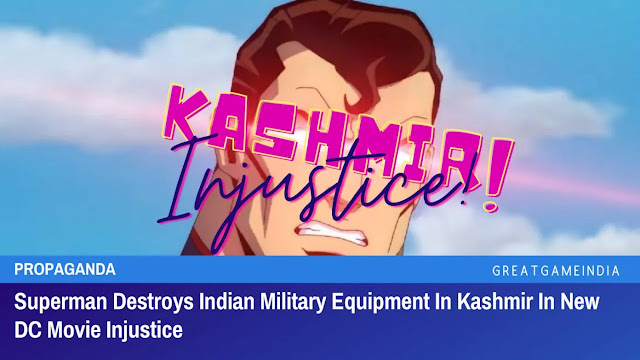 In DC’s new animated movie Injustice, Superman is shown destroying Indian military equipment in Kashmir. This meddling in the internal affairs of India is in-line with the stated Anglo-American policy of establishing a UN administered Air Force base in Kashmir.

Ahead of the release of DC’s latest animated film ‘Injustice’, social media websites are awash with a snippet from the movie that depicts Kashmir as a disputed region.

The clip that is going viral shows Superman and Wonder Woman destroying all military equipment in Kashmir and declaring it an “arms free zone”.

Further, Superman issues a direct threat saying, “You will agree to these terms, or they will be agreed upon for you.”

This is not the first time that Hollywood has tried to meddle with the Kashmir issue. Earlier, a recent Mission Impossible movie crew was denied access to Kashmir trying to shoot a nuclear bomb go off in the mountains.

The sixth movie in the Mission Impossible franchise, Fallout’s final act is set in Kashmir where the main protagonist Ethan Hunt, played by Tom Cruise, fights against time and gravity to defuse a nuclear bomb.

Fallout alone earned more than Rs. 36 Crore in India on its opening weekend. However, the makers had to settle for an alternate shooting destination, and whatever the audience saw of Kashmir in the movie was New Zealand.

The filmmakers also got into the trouble with the Central Board of Film Certification for their terminology, calling the state as ‘India-controlled Kashmir’ and depicting incorrect maps that misrepresented the boundaries of the state.

Hollywood obsession with meddling in the Kashmir conflict stems from an Anglo-American operation against India providing the culminating illustration of the hostility between India and Pakistan and the determination to satisfy their imperialistic ambition to rule over the entire sub-continent once again by the use of modern military forces with generous defense support by the Anglo-American bloc under the trusteeship of the United Nations.

In 1950, the Joint Chiefs of Staff of the American Armed Forces had submitted a confidential report to President Truman recommending the construction of air bases in Kashmir and its conversion into an “independent” state under the trusteeship of the United Nations.

“Turn the vale into an independent state, an Asiatic Switzerland. According to the American plan for an “independent Kashmir”, the international status of the valley is, therefore, designed to be so determined that in reality it finds itself not only completely dependent on American military and financial resources but also totally subservient to it as its protectorate.

Under the garb of ensuring the “independence” of Kashmir of protecting it against external aggression and of turning it into the “Switzerland of the East”, a direct stronghold of the United States would come to be imposed on it through the seemingly innocuous agency of the American-dominated United Nations.

The so-called “independence” of Kashmir guaranteed by the United Nations was, therefore a euphemism for United States’ control over it.