The History of Money, Warlord Banksters, and the Worship of Mammon 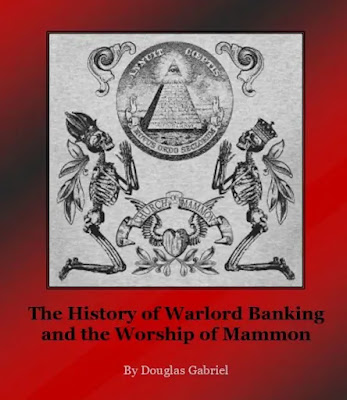 This report is also available as a PDF:

The path of the Warlord Banksters is complex and has been hidden by obfuscation, deceit, and subterfuge to obscure the truth and protect a small group of banking families whose scams have fleeced every nation on earth and hidden the loot in offshore tax havens that hold the stolen wealth of the world. These elite banking families own the controlling interests in the Fortune 500 companies through asset management companies, shill corporations, offshore accounts, and a thousand other “old banking tricks” that have been used since the time of King Hammurabi of Babylon. The Italian, Jewish, German, and Lombard bankers of Venice used the same old tricks of the “father of lies” to create privately owned central banking systems that are used to this day in most countries and still owned by the same self-aggrandizing banking families.

Greed, known as the evil demon “Mammon”, hasn’t changed his ways since the cut-throat machinations of the Medici bankers laid down the principals of corporate warlord banking that are inherently immoral and work against human advancement by engendering war, predatory banking, and economic slavery.

Ultimately, these “usury bankers” convinced governments to lock people up for not paying back loans on time. “Debtor’s Prison” was the outcropping of banking families, later called merchant bankers, controlling governments and economies that reached beyond “national” limitations. As commerce, trade, and mercantilism took over the world, bankers continued to have the upper hand and indeed made and destroyed kings and kingdoms with loans from their family banks. These families became corporate lineages that are still in power throughout the world today and associate through the Pilgrims Society, World Economic Forum, IMF, World Bank, BIS, and many secret cabals, like: the Vatican and British Knights of Malta, CFR, RIIA, the United Nations, and many other elite globalist groups.

The Inventors of Bank Fraud and the Demise of Babylon

Money was first developed in the ancient world in temples that kept track of the storage of grain and food for the next season, which was initially a good and moral intention that charged no service fee or interest. Coins and money were developed to represent the value of human labor and stored resources. Eventually, temples began to use their excess grain stores, and hard coins, to make loans to others as investments. This money was used for the benefit of the group, not the personal gain of the individual. When the control of money left the domain of the temple, the positive uses for surplus grain and coin were “turned to the dark-side”, and demons began fighting with the gods of the temple for the control of money and the lives of the people. Until we have the full picture of the evolution of money (Mammon), we will be unconsciously subject to these powerful demonic forces that are controlling our personal and global economic lives.