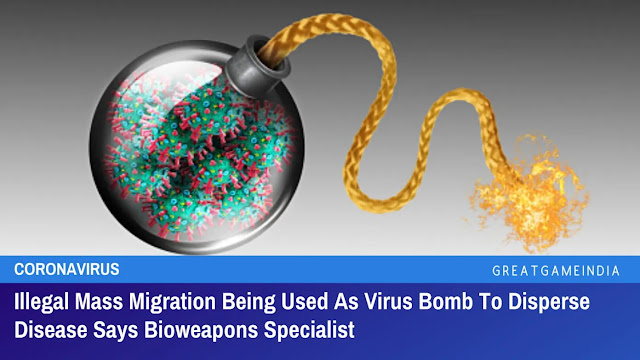 According to Bioweapons Specialists and Intel Agents, illegal mass migration is being used as a Virus Bomb to disperse disease.

Fox host Lara Logan on Tuesday cited unnamed “bioweapons specialists and intel agents” who told her allowing migrants into the country is a “typical” way to launch a “virus attack” on your own country.

The number of migrants seeking entry has surged this year, outpacing the government’s ability to process and/or deport people in a safe and timely fashion.

Currently, there are at least 10,000 Haitian migrants camped out at the border hoping to enter the U.S. However, the Biden administration is sending them back to Haiti.

Appearing on The Story with Martha MacCallum, Logan suggested (watch the interview below) the border surge could be a “virus bomb” set to detonate in the form of thousands of migrants who may be bringing Covid into the U.S.:

And you know, bioweapons specialists and intel agents tell me that that’s typical of how you disperse a virus if you were doing something like a virus bomb or a virus attack in your own country or on another country.

They also know that those people are dispersing now. They know that there are hundreds and hundreds of Haitians who have run away from under the Del Rio bridge, right? And have just disappeared into the countryside.

And you know, bioweapons specialists and intel agents tell me that that’s typical of how you disperse a virus if you were doing something like a virus bomb or a virus attack in your own country or on another country.

She added, “So those are questions that we don’t even get a chance to ask.”

As reported by GreatGameIndia last year, in an explosive interview Dr. Francis Boyle, who drafted the Biological Weapons Act has given a detailed statement admitting that COVID-19 is an offensive Biological Warfare Weapon and that the World Health Organization (WHO) already knows about it.

Dr. Boyle also touches upon GreatGameIndia‘s exclusive report Coronavirus Bioweapon – where we reported in detail how Chinese Biowarfare agents working at the Canadian lab in Winnipeg were involved in the smuggling of viruses to Wuhan’s lab from where it is believed to have been leaked.

The report has caused a major international controversy and is suppressed actively by a section of mainstream media and fact-checkers backed by NATO’s propaganda arm the Atlantic Council. Meanwhile, the reporter who attacked our story has been fired for plagiarism.