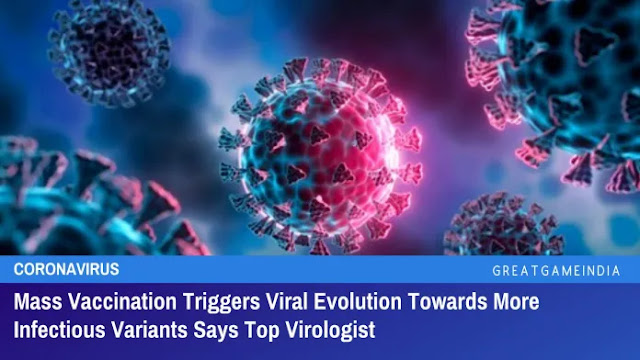 Mass vaccination, therefore, promotes viral evolution towards more infectious variants. The resulting enhancement of viral infectious pressure makes it more likely for everyone, including healthy, unvaccinated people to come in contact with the virus, especially in times where infection prevention measures are loosened.

To the extent that high infection rates cause people to become re-exposed shortly after a previous asymptomatic infection, their innate Sars-CoV-binding antibodies (Abs) will be suppressed by short-lived, poorly functional anti-spike Abs, known to not be responsible for preventing the infection from becoming symptomatic.

It is precisely the suppression of these broadly protective innate Abs that makes previously asymptomatically infected individuals more susceptible to disease.

It is also precisely this phenomenon that explains why a first wave of a natural pandemic is followed by a second wave in younger age groups.

The even bigger amplitude of that second wave merely reflects the overwhelming contribution of a population’s innate immunity to its overall immune protective capacity.

So, this is why we’re now seeing more and more disease in younger age groups, and even children, although they were perfectly protected during previous waves.

Extending mass vaccination campaigns to these younger age groups is the most irresponsible public health proposal (decision?) ever as

As already mentioned, the higher viral infectivity rates grow, the more the incredibly precious innate immune capacity of the population gets eroded and the faster vaccine-mediated protection will wane as a result of enhanced evolution of the virus towards S-Ab-directed resistance.

In the meantime – and for as long the C-19 vaccines protect against disease – mass vaccination is turning healthy people into asymptomatic breeding grounds and spreaders of evolving, more infectious variants, which is quite the opposite effect of what mass vaccination was supposed to do (i.e., to generate herd immunity).

We only begin to see the early consequences of waning vaccine protection, erosion of innate immunity and fulminant expansion of steadily evolving, more infectious variants.

This is to say that it is the complete lack of understanding of why morbidity rates are now increasing in younger age groups that now prompts short-sighted experts and politicians, who typically have no long-term antennae, to advocate for mass vaccination of younger age groups and children.

As they obviously lack any kind of insight into the evolutionary dynamics of a pandemic and how those are driven by the interplay between viral infectious pressure and host immune pressure in the population, they don’t understand that mass vaccination of the younger age groups is only throwing fuel to the devastating fire of a self-amplifying vicious circle.

I challenge any expert, regardless of reputation or qualifications, to invalidate or oppose my arguments in a public debate on a mainstream broadcasting channel.

If that debate doesn’t take place, it should be very straightforward for youngsters, parents, guardians, or even the children themselves, to draw their own conclusions and decide what is best for themselves or the children.

If we could only have politicians and short-sighted ‘experts’ hanging this sheet over their bed, we might finally be in a position where we could start cleaning up some of the mess they have made and put an end to all of the completely unacceptable and needless animosity it caused between the vaccinated and the unvaccinated.

Time has come to turn all this chaos into a constructive effort that is finally driven by ‘Science’ and ‘Solidarity’!

Geert Vanden Bossche received his DVM from the University of Ghent, Belgium, and his PhD degree in Virology from the University of Hohenheim, Germany. He held adjunct faculty appointments at universities in Belgium and Germany. After his career in Academia, Geert joined several vaccine companies (GSK Biologicals, Novartis Vaccines, Solvay Biologicals) to serve various roles in vaccine R&D as well as in late vaccine development. Geert then moved on to join the Bill & Melinda Gates Foundation’s Global Health Discovery team in Seattle (USA) as Senior Program Officer; he then worked with the Global Alliance for Vaccines and Immunization (GAVI) in Geneva as Senior Ebola Program Manager. This article was originally published on his website.