If Universal Healthcare Can Be Implemented In Countries Like Thailand, Why Not India? 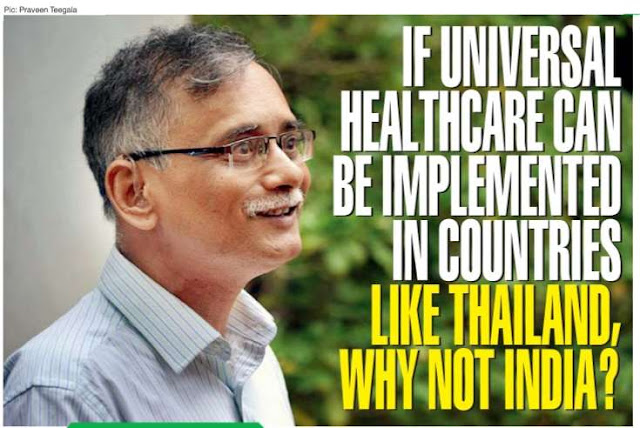 Award-winning novelist Dr Arun Gadre has made it his life's mission to combat unethical medical practices in India. He was in Hyderabad on Sunday to deliver a talk in the city as part of his ongoing campaign to revive the “endangered species of ethical doctors from the rot of commercialisation“.

Commenting about the state of affairs in the city, he says, “Hyderabad is no different from any other city . Here, doctors are just as corrupt and driven by the commission they get from corporate hospitals, rather than the well being of their patients. Ever since I began exposing malpractices, offers to work here stopped coming in. But as a city at the forefront of medicine, Hyderabad is at the crossroads to decide whether we're going to continue the commodification of medicine, or change it.“

But Dr. Arun decided to stand up against this commodification over two decades ago. As a young doctor, he came in with a fair amount of idealism and romantic perceptions about the field. “I went into practice along with my wife Jyothi in a tribal area across Adilabad, but had to leave because of financial troubles,“ recalls Arun, who went on to work as a private gynaecologist. “Initially, it was all fine, but gradually, I began to feel suffocated with the rampant malpractices. For example, I would normally charge only `6,000 for a C-section -the entire process, including medication -but others would charge `5,000 as commission,“ he says.

This was an everyday fight. Disenchanted with medical consumerism, Arun decided to resettle in a small town, Lasalgaon, Nashik, which had no gynaecologist for 70 kilometres.“Most people ask how we've survived in Nashik for over 20 years providing cheap healthcare services. My wife and I would rather do justice to the profession. The fact is that we do this so that we can survive. It's ridiculous for a doctor to think about money while treating his patients,“ says Arun, adding, “We were happy that neither of our daughters chose medicine. Many doctors have deliberately pushed their children out, but luckily, we didn't have to.“

In India, the private sector has grown catastrophically, and healthcare has become inequitable, rues Arun. “The middle class is getting poorer at the hands of corporate bigwigs -it's a toxic circus. We must take a leaf out of the universal health care policies in countries like UK, Canada, Brazil, and Thailand. In Thailand, if a labourer meets with an accident, he is taken to a hospital nearby, shifted to a major hospital where he stays even for 20-30 days, signs a form and leaves. If this can happen in Thailand, why not India?“ Definitely some food for thought from a “medical whistleblower“ fighting against corruption in the healthcare industry .