Dictator Erdogan Cries “Stab in the Back”; Exposes Angela Hitler 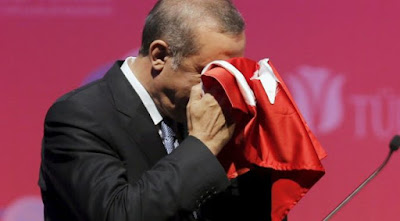 Although we already knew this fact years ago, still the impact on the mainstream media around the world about this revelation would be far greater now that their deepest secrets are slowly coming out directly from their own turf.

‘Stab in the back’: Turkey responds fiercely to Germany’s ‘disgraceful’ genocide vote

Turkish media and government figures have condemned Germany’s vote to recognize the 1915 massacre of Armenians by Ottoman Turkish forces as a genocide.

“Comrade stabs us in the back”, “Turkey will not forget” and “Open the gates” are just some of the headlines splashed across Turkey’s newspapers Friday morning, reports Turkish Anadolu Agency. 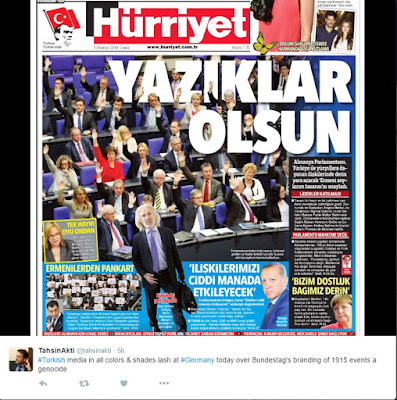 “Shame on You” screams the non-government funded Hurriyet along with a picture of the voting German parliament.

Sozcu, a secular-nationalist newspaper writes: “The grandchildren of Hitler accusing Turkey of genocide” accompanied by a photo of Merkel outfitted with a Hitler mustache and swastika flag. 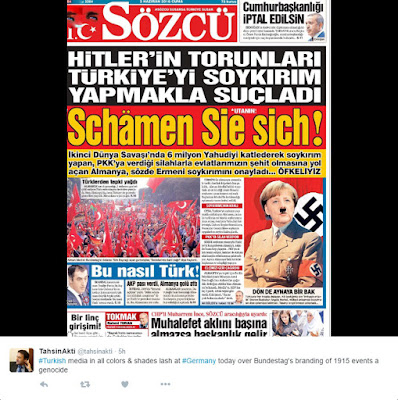 The strongest cover came from the AK Party-related journal, Star, which devoted a full page to Merkel with a Hitler mustache with the headline: “Everything for the PKK”, referring to the Kurdistan Workers Party (PKK). Turkish security forces are currently engaged in operations against the PKK in southeast Turkey. 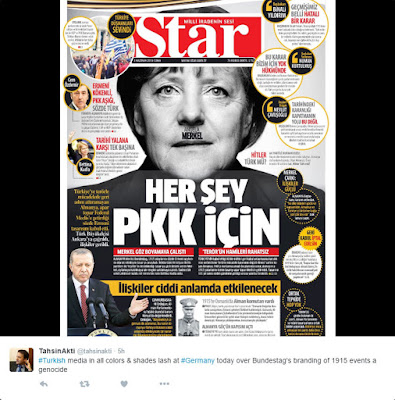 Holocaust comparisons to match those harsh words came from within the Turkish government too. 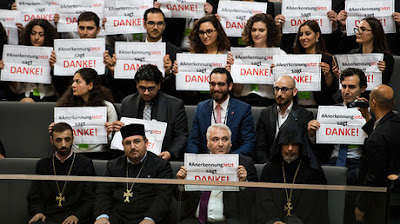 “They burned Jews in furnaces and now they slander the Turkish people by accusing us of some genocide. Why don’t you look at your own history first,” Justice Minister Bekir Bozdağ was quoted by the Anadolu Agency.

On Friday the Turkish foreign ministry responded to the German vote in a written statement, published on their official website and translated by AA, where they describe the motion as “an example of ignorance” and “disgraceful.”

“This resolution is an example of ignorance and disrespect for the law, politicizing history, preventing free discussion on historical issues and trying to impose the self-created taboo of the Armenian narrative as an indisputable fact,” said the ministry.

“There is nothing that Turkey will learn from the parliament of the Federal Republic of Germany,” they added.

Turkey denies allegations of genocide, instead acknowledging that there were “casualties on boths sides.” Prime Minister Binali Yildirim said these were “Ordinary events that could take place in any society or any country… in 1915, under conditions of World War I,” when speaking to the press on Thursday, Hurriyet reported

“The history of the Turkish nation is clear. There is no single event in our history that we feel ashamed of,” said Yildrim to the Star as cited by AA.

Despite Turkish President Recep Tayyip Erdogan saying relations between Germany and Turkey will be “seriously affected”, by Friday PM Yildirim had adopted a less severe approach.

“Nobody should expect that our relations with Germany to get worse completely and suddenly due to such resolutions,” he said.

This is another proof that the Khazarian Mafia are in big trouble and true to their character, are now after each other’s throat. 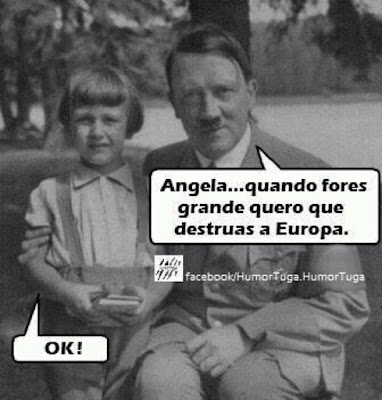 Just in case you haven’t notice it yet, Truth has been firing from all directions, and it’s been this way, i.e. it has gone mainstream, since 2012, the year the world as we knew it ended.