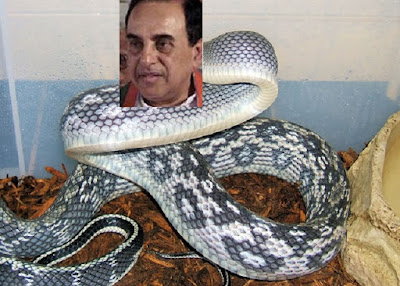 New Delhi: Justifying before the Supreme Court retention of penal provision for hate speeches and pitching for stern action against the defaulters, the Modi government on Tuesday recommended prosecution of BJP leader Subramanian Swamy for promoting hatred between Hindus and Muslims.


In a surprising turn of events, the government has told the Supreme Court that a book on terrorism authored by the BJP's firebrand leader is behind this provocation.

The affidavit filed by the government today was in response to Swamy's petition challenging the constitutional validity of the Indian Penal Code Section 153A on the grounds that it violates free speech.

According to a report published in TOI, Swamy had earlier challenged before the SC various provisions of the Indian Penal Code dealing with offences of 'hate speech', saying they were violative of the fundamental right to freedom of speech.

Swamy had contended in his plea that Sections 153, 153A,153B, 295, 295A, 298 and 505 of the IPC in respect of so-called "hate speech" were used to penalise people for expressing their views even within the bounds of reasonable restrictions and they should be set aside.

Government's recommendation, against one of the senior BJP leaders, has come at a time when the governing body itself is being criticised for not being able to rein in its ministers and leaders of ruling party who are making provocative speeches.

As per the report, the Centre further said that the validity of the penal provisions cannot be questioned as the Constitution allows reasonable restriction on citizen's right to freedom of speech and the provisions are meant to maintain peace and harmony in the society.

"It is respectfully submitted that our country is inhabited by persons belonging to different religions, castes and classes. Our Constitution is base upon the principle that persons of all castes, creed and religion must live together in harmony and that in the long run prosperity and salvation are in union and not in division," the Centre told the court.

Notably, Swamy is also facing various criminal proceedings in Delhi, Mumbai, Assam, Mohali and Kerala for expressing views on terrorism which was termed as hate speech under the IPC provisions. He alleged that the provisions dealing with offences of 'hate speech' were violative of the fundamental right to freedom of speech and were being were used to penalise people for expressing their views even within the bounds of reasonable restrictions and they should be set aside.

However, opposing Swamy's plea, the Centre said "the provisions are very clear and neither too widely worded nor is indefinite and intended to punish those who either attempt to promote class hatread or class enmity,"

It also justified criminal proceedings against Swamy saying "he made hate speech against a community" in his book. "The book is to be considered in all its aspects as it contains matter which promotes feeling of enmity and hatred between Hindus and Muslims in India. Therefore the petitioner has violated Sections of IPC," the affidavit said.

Section 153 deals with provoking people with the intent to cause riot and Section 153A talks about promoting enmity between different groups on grounds of religion, race, place of birth, residence, language etc. Section 295 makes injuring or defiling places of worship with the intent to insult the religion of any class an offence. Section 298 covers cases of hurting religious sentiments deliberately.

Agreeing to decide constitutional validity of penal provision in respect of hate speech, the Supreme Court in July had issued notice to Centre and sought its response.

Sleuth Without A Clue