Protests at the drop of a hat 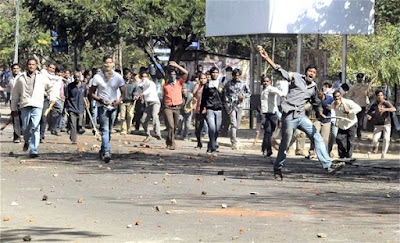 The Culture Of Protests Seems To Have Taken Root In City Varsities, And While Several Issues Highlighted Are Pertinent, Others Often Are Not.

From taking to the streets for being served a chicken-less meal that it was on Gandhi Jayanti, when all chicken shops are closed, s another story), to `protesting' against petty social media arguments to even kicking up a storm or discrepancies in Wi-Fi connec ivity on campus, students these days seem to waste no time in organizing dharnas to make themselves heard. That these agitations eat into precious study-time isn't he least of their concerns.

Over the past few months, he premises of University of Hyderabad (UoH), English and Foreign Languages University (Eflu), Osmania University (OU) and Maulana Azad National Urdu University (Manuu) have been flooded with student protests on a wide range of issues. But while some among them raised pertinent points, most others did not.

University administrations, predictably , agree. “Earlier, issues raised by students were unbiased and had no political colour. But today, lot of issues raised by them are agenda-driven and enjoy political backing,“ said Prakash Kona, proctor, Eflu.

In fact, such is the situation that authorities are now on tenterhooks all round the clock. “Unrest and impatience among students leads to protests. Students are generally not angry with the system.Through their protests, they just want to establish the intensity of their anger,“ said E Suresh Babu, registrar of OU.

Veteran leaders feel that political-affiliations, coupled with the absence of an umbrella body that represents all students, has led to a surge in `frivolous' protests.

“During our time as student leaders, we had to think twice before holding a protest. That's because we knew that illegitimate protests may affect the rhythm of elections on campus. But today , students misuse this rhythm for their own good and protest on any issue that comes their way to improve their prospects of garnering more support from the students,“ said M Kodandaram, chairman of Telangana Joint Action Committee. He was the first student union leader at UoH in 1980-81.

Seconding Kondandaram's argument, students from across the country claim that these not-so-important protests take place due to the lack of transparency in the administration. Referring to the ongoing protest in New Delhi against University Grant Commission's decision to withdraw non-NET fellowships, Sucheta De, president of the All India Students Association said, “When university administrations fail to include students in decision-making process, it immediately sparks anger.“

Back home in Hyderabad, students look at it from a different perspective. Though they admit to the protest culture taking a northward turn, the term, they insist has a broader perspective in today's context. “Today , the word `protest' has many definitions. It's no more about just going around the campus shouting slogans or pelting stones. Students express their dissent over an issue through cultural means, film screenings, rallies, public meetings etc as well,“ argued Zuhail KP , president of student union in UoH.