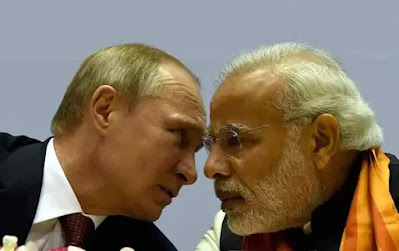 Due to the West’s efforts to split Russia off from international economic cooperation, Russian and Indian businesses are presently confronting difficulties. But it would seem that its having minimal impact as Russia-India ties remain unaffected by Washington’s blackmail.

In New Delhi, Russia’s top ambassador had a string of discussions focused on mutual political and economic issues, as the US presses India to impose sanctions on Moscow for its military action in Ukraine.

However, Russia’s top diplomat is confident that these threats will have no impact on Moscow-Delhi relations. He condemned America’s behavior as “blackmail” in his statement, saying that Russia’s special operation in Ukraine and the West’s response to it had prompted the necessity to “dot some i’s and cross some t’s” via further conversations between Moscow and its key partners, like as India and China.

The chief of Russian diplomacy was welcomed to Hyderabad House, a historic building in New Delhi where almost all high-level conversations take place, on Friday.

The convoy carrying Lavrov turned up early in the afternoon, with dozens of Indian and Russian media present to document the ceremony.

The meeting between Russian Foreign Minister Sergei Lavrov and his Indian counterpart Subrahmanyam Jaishankar was conducted behind closed doors, but media were allowed to observe the proceedings throughout an interchange of opening address.

“Our bilateral relations have continued to grow in many areas, and we have diversified our cooperation by expanding our agenda,” said Subrahmanyam Jaishankar, while also noting that “the meeting is taking place in a difficult international environment.”

Lately, the US has appeared to be trying to put a great deal of effort into trying to drive a wedge between Moscow and New Delhi, with US Deputy National Security Adviser Daleep Singh mentioning that the US does not want to see a “rapid acceleration” in India’s energy as well as other resource imports from Russia, and that nations that try to get around anti-Moscow economic sanctions over Ukraine will face repercussions.

However, Russia’s top diplomat is confident that any such threats will have no impact on Moscow-Delhi relations. He criticized America’s behavior as “blackmail” in his speech:

Due to the West’s efforts to split Russia off from international economic cooperation, Russian and Indian businesses are presently confronting difficulties. Nonetheless, Lavrov claims that Moscow has been working for several years to replace the US dollar and euro in commerce with nations like India and China with national currencies:

Although the precise dynamics of such transactions are still being worked out, it it seems that Moscow and New Delhi are close to reaching an agreement that will benefit both parties, whether it is a scenario in which agreements are compensated for in Indian rupees tied to the US dollar rate, as theorized in the Indian press, or maybe using the Chinese yuan as a benchmark currency in such exchanges, with both parties establishing ruble and rupee accounts.

Sergei Lavrov spoke with India’s Prime Minister Narendra Modi following his meetings at Hyderabad House. The meeting was conducted in a private suite.

READ MORE
Gold-backed ruble could be a game-changer