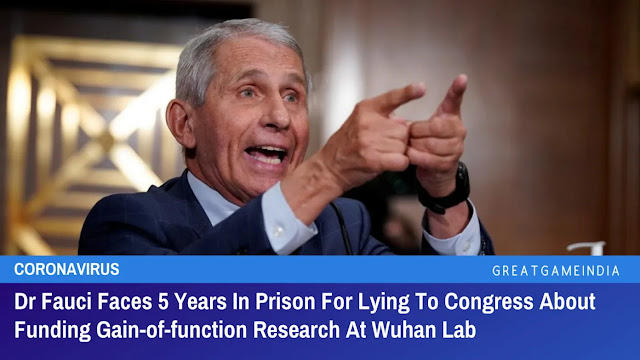 July 22, 2021
On account of his recent congressional testimony, Dr Fauci maybe facing 5 years in prison for lying to the Congress about funding the Gain-of-function research at Wuhan lab.

Senator Rand Paul (R-Kentucky) is asking federal prosecutors to hold Dr. Anthony Fauci accountable for allegedly perjuring himself in congressional testimony over funding research that made an animal virus transmissible to humans.

“I will be sending a letter to the Department of Justice (DOJ) asking for a criminal referral because he has lied to Congress,” Paul said on Tuesday night in a Fox News interview.

Fauci denied lying to Congress when he testified in May that the US National Institutes of Health (NIH) never funded so-called gain-of-function virus research at China’s Wuhan Institute of Virology.

Paul cited a paper by a Wuhan scientist on research into bat coronaviruses, funded by the NIH, and noted that it had been reviewed by MIT biologist Kevin Esvelt, who concluded that “certain techniques that the researchers used seemed to meet the definition of gain-of-function.”

Lying to Congress is a felony punishable by up to five years in prison. Referrals to the DOJ by members of Congress are non-binding and often lead to nothing. Paul argued that there’s no question that the research in question is the epitome of gain-of-function.

“We have scientists that will line up by the dozens to say that the research he was funding was gain-of-function,” the senator told Fox. “He’s doing this because he has a self-interest to cover his tracks and to cover his connection to Wuhan lab.”

He added that regardless of whether it’s proven that Covid-19 originated in the Wuhan lab, Fauci is “lying about whether or not he funded gain-of-function research, and yes, he should be punished.”

As reported by GreatGameIndia earlier, Josh Rogin, a columnist of the Washington Post claims that scientists don’t speak up about issues connected to Dr. Anthony Fauci’s research.

Rogin also claims Fauci is the ‘Godfather’ of gain-of-function research that was taking place at the Wuhan laboratory which was then named as the site of the coronavirus outbreak.

American tax-dollars were used to fund controversial research in China at the Wuhan Institute of Virology on gain-of-function which is the ability of a virus to jump from animals to humans.

This cross-species jump was not natural and was achieved by the team lead by the Batwoman of China, Shi Zhengli. You can read more about it in detail in COVID19 Files – Scientific Investigation On Mysterious Origin Of Coronavirus.

Fauci Emails reveal that it was Dr Anthony Fauci himself who threatened the Indian scientists and forced them to withdraw their study which found that COVID-19 manmade having AIDS virus like insertions.

This research was funded by a ten-year, $200 million international program named PREDICT.

That program, in turn, was funded by the U.S. Agency for International Development, along with other countries.

This project backed-up by Dr. Anthony Fauci diverted US funds to engineer Coronavirus at Wuhan lab via a company now under federal investigation.

That company is EcoHealth Alliance, headed by Peter Daszak.

The interesting part is that Peter Daszak is the same guy who orchestrated the publication of a ‘scientific’ paper in Lancet claiming that the virus made the cross-species jump naturally.

Peter Daszak is also the same guy the WHO sent to China to investigate the claims whether the virus evolved naturally or was coronavirus engineered.

Meanwhile, American lawmakers have introduced the Fire Fauci Act with the intention to fire Dr Anthony Fauci for misinformation with regards to COVID-19 and for covering-up the origin of the virus.

The Fire Fauci Act will bring Fauci’s salary to $0 and require Senate confirmation to fill his position.