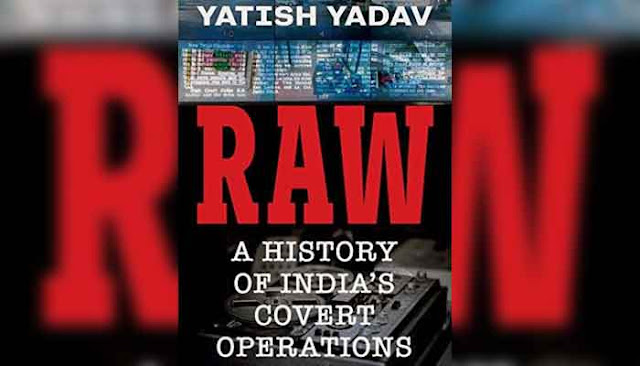 The Research and Analysis Wing, India’s shadowy external intelligence agency, is one of the country’s least understood institutions—at least in part by design. Perhaps fittingly for a spy agency, there is very little information about RAW in the public domain. What is this organisation, its structure, its role and vision? Why was it set up? Who are the people that run it? Investigative journalist Yatish Yadav reveals RAW’s secrets in his new book RAW: A History of India’s Covert Operations.

Set up in 1968, as a reaction to India’s massive intelligence failure during the war with China, RAW played a crucial role in the formation of Bangladesh. It has since carried out highly successful covert operations in Fiji, Afghanistan and Sri Lanka, and has countered and foiled Pakistani spy agency ISI’s machinations in the subcontinent. RAW has operations in other parts of the globe too; it played an important role during the Iran–Iraq war, for instance.

Yatish Yadav disclosed that Indian intelligence recruited three top Afghan leaders, including the leader of Northern Alliance, Ahmad Shah Masood, in 1990s. Two other leaders who are still active in Afghan politics are not named by Yadav.

One of these unnamed assets could be Abdullah Abdullah, the current “Chief Executive” of Afghanistan. Abdullah is known to have close ties with New Delhi, even his family members live in India.

Here’s an excerpt of the book about Afghanistan:

“RAW also created immense goodwill in many countries; it helped a top Afghan politician and former warlord to escape the Taliban and even got his relative a job in Turkey. RAW spooks relentlessly bribed, cajoled and blackmailed India’s enemies”.

Kulbhushan Jhadav, an Indian agent got arrested in Balochistan. This exposed that RAW agents, based in Afghanistan and Iran, were industriously accomplishing covert ops in Pakistan. 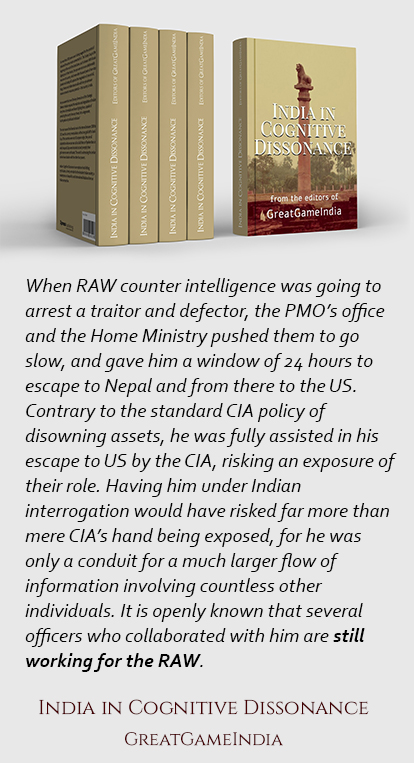 Reports say, Jadhav had two passports, one in his own name and another in the name of Hussein Mubarak Patel. Jadhav had links with Uzair Baloch who has been found guilty of working for the Iranian intelligence in Pakistan.

Below excerpts from the book sheds light on RAW ops in Sri Lanka.

“In Sri Lanka, RAW played a double game, helping the Sri Lankan Army to destroy the LTTE while protecting Indian assets against the Tigers and President Gotabaya Rajapaksa’s hit men. According to a RAW spymaster in Colombo, MEA bungled and allowed the Chinese to get a foothold in the island. Avinash Sinha arrived at Colombo Fort Café on the morning of 3 December 2005, looking forward to what he had been told was the best Sri Lankan breakfast in the city.

Avinash, a RAW operative, perhaps a few autumns younger than Kosala Ratnayake, had returned to Colombo that October after three years. He had recruited Kosala, a top functionary in the Sri Lankan government, over several wet evenings in January 2002. That was when the Sri Lankan regime had been seriously engaging with the Liberation Tigers of Tamil Eelam (LTTE) for peace talks”.

No country can increase its global reach without intelligence support. That India has made enormous strides in its stature and influence is testimony to RAW’s success. Yet, public accounts of its work exist only in highly romanticised fictional stories.

Investigative journalist Yatish Yadav follows the lives of real agents and maps their actions in real situations. His conversations with Indian spies provide insight into how covert operations actually work. RAW: A History of India’s Covert Operations is the first comprehensive account of Indian spy networks and their intelligence gathering, and their role in securing and advancing Indian interests.

We need your support to carry on our independent and investigative research based journalism on the Deep State threats facing humanity. Your contribution however small helps us keep afloat. Kindly consider donating to GreatGameIndia.