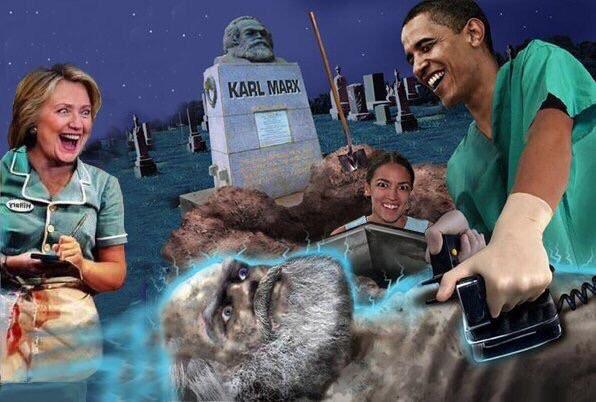 When you drill down at foundations like Ford, and government agencies like the State Department, and many universities, you find quite a nice sprinkle of Communists.

The principal tenet of these loons is: all private property is a crime.

They advocate the seizure of private property by the State.

What they really mean is: “We’re eliminating the horror of property by stealing it for ourselves.” Marx omitted that wrinkle from the Manifesto.

He laughingly called the State: the Dictatorship of the Proletariat. As if the huddled masses would actually rule.

What he intended was: “If the peasants form their own collective farms, gun them down and take the land.”

“And censor all opposition.”

Marxism is aimed at the Marks. A mark is an old term referring to the target of a con. Target, rube, sucker.

The mark buys what the hustler is selling. And then a little while later, he realizes he’s naked, walking alone at night, and it’s raining and he’s in a blind alley.

That kind of thing.

“What happened to you, kid?”

“A turd sold me a Rolex. It turned out to be a cheap fake. It doesn’t run. It’s stuck at midnight.”

“That’s where you are. Midnight. Time to start a new life, kid, before the sun comes up.”

In all but one or two modern nations, classical Communism doesn’t work, because corporations have too much power. So the grand theft is cooperative, pulled off by the corps and the gov.

The theme, though, is old. Top-down is made to look like bottom–up. “The people.” A sick joke. Every special group and minority is taught to believe it will rise and take over. A pipe dream.

The self-styled urban outlaw who works for Black Lives Matter is actually working for Rockefeller. Which is the furthest thing from what he wants to believe.

His job is to disrupt the circuitry of civilization and make it easier to steal.