A Post-Dollar World Is Coming 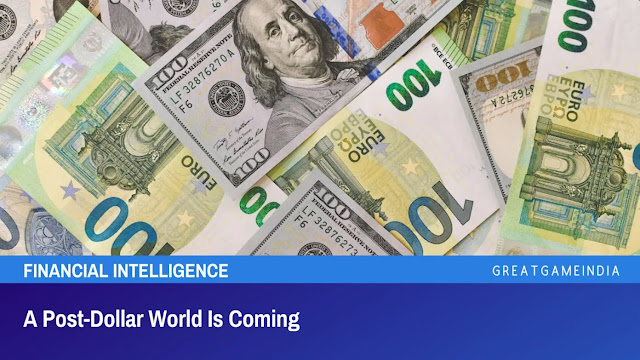 The US owes the rest of the world a net of $18 trillion at the moment, which is 73% of its GDP, considerably exceeding the 50% mark that has frequently signalled currency crises in the past, all of which suggest the coming of a post-dollar world.

Analysts used the old Tina (there is no alternative) argument last month as the dollar soared to levels last seen nearly 20 years ago to forecast further gains for the strong greenback.

What occurred 20 years ago signals that the dollar is near to peaking rather than continuing to rise. The dollar continued to rise during the dotcom bust even as US stocks plummeted, before beginning a six-year fall in 2002. Similar turning point could be approaching. And this time, the depreciation of the US dollar might persist considerably longer.

Whether or not inflation has been taken into account, the dollar’s value in relation to other major currencies is currently 20% higher than its long-term trend and higher than the peak attained in 2001. Since the 1970s, a dollar cycle’s upswing has typically lasted seven years; the current upswing is currently in its eleventh year. Fundamental imbalances also bode ill for the dollar.

A current account deficit that consistently exceeds 5% of gross domestic product is a sure warning that financial trouble is on the horizon. That is especially true in industrialised nations, where these occurrences are uncommon, and is concentrated in countries that are prone to crises, like Spain, Portugal, and Ireland. Currently, the US current account deficit is approaching the 5% barrier, which is has broken only once since 1960. That was during the dollar’s downswing after 2001.

And last, when the US economy slows compared to the rest of the globe, investors tend to turn away from the dollar. Although the US has been growing far more quickly than the average pace for other developed economies in recent years, it is expected to slow down in the years to come.

If the dollar is about to go into a downturn, the question is whether it will persist long enough and go far enough to endanger its position as the most trusted currency in the world. 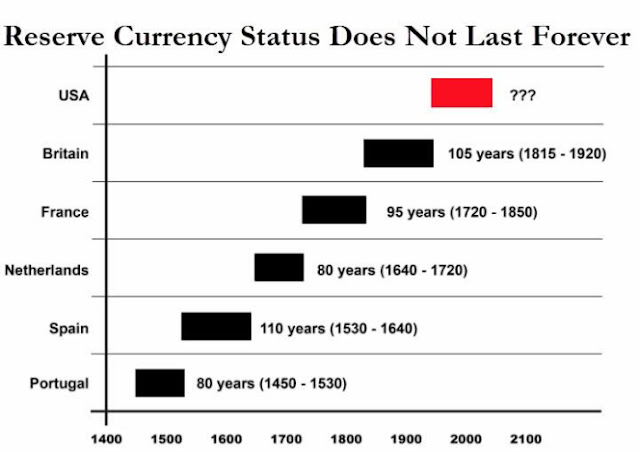 The weaknesses of the dollar’s competitors have strengthened the dollar. Financial crises have regularly weakened the euro, while a totalitarian government has tight control over the renminbi. Alternatives, though, are becoming more popular.

The Canadian and Australian dollars, the Swiss franc, and the renminbi are among the “other currencies” that fall outside of the “Big Four” of the US, Europe, Japan, and the UK. They presently make up 10% of the world’s reserves, up from 2% in 2001.

Their advances, which surged during the pandemic, mostly hurt the US currency.

The percentage of dollars in foreign exchange reserves is currently 59%, the lowest level since 1995.

Although they may appear battered right now, digital currencies are still a viable long-term choice.

Meanwhile, the impact of US sanctions on Russia is highlighting the US’s power in a dollar-driven world and motivating many countries to expedite their search for alternatives. The next step might involve currency blocs rather than a single reserve currency.

The biggest economies in South-east Asia are bypassing the dollar by settling payments directly with one another more frequently. Malaysia and Singapore are two of the nations that have such agreements with China, which also extends offers of renminbi help to countries who are experiencing financial difficulties. To lessen their reliance on the dollar, central banks from Asia to the Middle East are establishing bilateral currency swap lines.

The dollar appears to be benefiting from its status as a safe haven today, much like it did during the dotcom bubble. But buyers of US assets are not in a hurry. Everywhere they can, they are lowering their risk, and keeping the resulting cash in dollars.

This does not represent a vote of confidence in the US economy, and it is important to keep in mind that positive analysts used the same justification for purchasing tech companies at their most recent top prices: there is no other way to invest. That didn’t go well. Tina is never a wise way to invest, particularly when the fundamentals are weakening.

So don’t let the strong dollar deceive you. A post-dollar era is approaching.