The Ending of Time 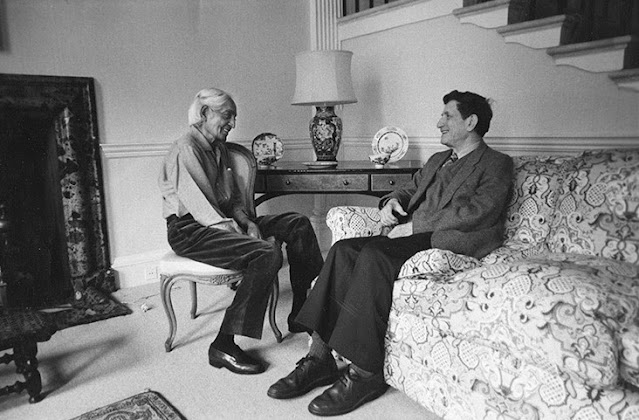 Krishnamurti: The social conditioning, the religious conditioning, education, poverty, riches, climate, food; the outer. Which may condition the mind in a certain direction. But as one examines it a little more, the psychological conditioning is also from the outer, somewhat.

David Bohm: It is true that the way a person thinks is going to be affected by his whole set of relationships. But that doesn't explain why the conditioning is so rigid, and why it holds.

K: That is what I am asking too.

K: They have tried all that.

DB: Yes, the whole belief of Communism was that with a new society there would be a new man. But there have been none! I think that there is something fundamentally in the inward that holds, that resists change.

K: What is it? Will this question lead us anywhere?

DB: Unless we actually uncover it, it will lead nowhere.

DB: Well, I think that we have been talking of bringing about an ending to time, an ending to becoming. And we talked of coming into contact with the ground, through complete rationality. But now we could say that the mind is not rational.

DB: This is perhaps part of the block. If we were completely rational, then we would of necessity come to this ground. Would that be right?

K: Yes. We were talking the other day about the ending of time. The scientists, through the investigation of matter, want to find out that point. Also, the so-called religious people have endeavored to find out—not only verbally—if time can stop. We went into that quite a bit, and we say it is possible for a human being, who will listen, to find out through insight the ending of time. Because insight is not memory. Memory is time, memory is experience, knowledge stored up in the brain, and so on. As long as that is in operation there is no possibility of having insight into anything. Total insight, not partial insight. The artist, the scientist, the musician, they all have partial insights and therefore they are still time-bound.

Is it possible to have a total insight, which is the ending of the 'me', because the 'me' is time? Me, my ego, my resistance, my hurts, all that. Can that 'me end? It is only when that ends that there is total insight. That is what we discovered. And we went into the question, is it possible for a human being to end totally this whole structure of the 'me'? We said yes, and went into it. Very few people will listen to this because it is perhaps too frightening. And the question then arises: if the 'me' ends, what is there? Just emptiness? There is no interest in that. But if one is investigating without any sense of reward or punishment, then there is something. We say that something is total emptiness, which is energy and silence. Well, that sounds nice, but it has no meaning to an ordinary man who is serious and wants to go beyond it, beyond himself. And we pushed it further: is there something beyond all this? And we say there is.

You see, man has tried everything in this direction—fasting, self-torture in various forms, abnegating himself through belief, and denying himself through identification with something greater. All the religious people have tried it, but the 'me' is still there.

Excerpt from The Ending of Time

In the early 1980s, J. Krishnamurti and theoretical physicist David Bohm began dialogues investigating the origin of human conflict and what one might do about the barriers that stand in the way of insight. The book The Ending of Time is a series of these dialogues that took place in America and England and covers some of the most comprehensive talks between Krishnamurti and Bohm. They discussed profound existential questions that illuminate the fundamental nature of existence, exploring topics such as insight, illusion, awakening, transcendence, and morality. The pair also looked at one’s relationship to society and offer new perspectives on thought, death, awakening, self-realization, and the problem of the fragmented mind. The title of the book hints at humanity’s “wrong turn” and the talks between Krishnamurti and Bohm explore if it is possible for one to fundamentally change—suggesting that transformation requires one to move beyond the separative and time-bound nature of the self. Click here to buy the book in English, or here to order it in Spanish.