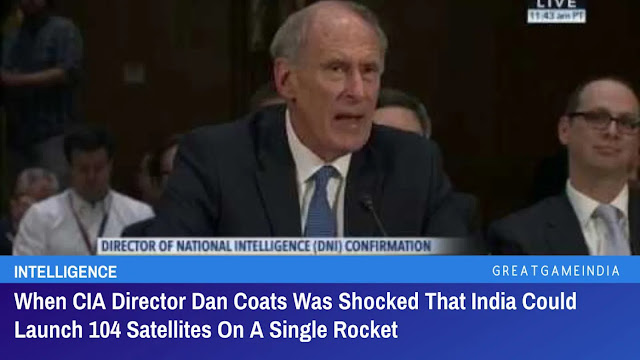 During US Senate Select Intelligence Committee confirmation hearing in March 2017, DNI (Director of National Intelligence) and CIA Director pick Dan Coats were shocked to learn that India could launch more than a hundred satellites into space on a single rocket. The director then proposes to develop defensive and offensive capabilities to counter India’s technological edge in space.

“I noticed in your statement that you highlighted and I quote acquisition proficiency of our satellite specialist unquoted at the national reconnaissance office.

I’m sure you probably agree however that the requirements development process for our satellites is in need of significant reform.

Will you work with the committee to streamline that process to ensure that we can more quickly get to the design, build and launch phase.”

“Absolutely agility is critical in this time of rapid technological change.

We see and I believe now that eleven nations have the capacity to launch instruments into space.

I was shocked the other day to read that the nation of India on one rocket launched deposited more than a hundred satellites in space.

They may be small in size with different functions and so forth, but one rocket can send up I think it was 111 platforms.

We cannot afford to be behind the curve in terms of development of both the offensive and defensive capacities of this that we put up into space.

And so streamlining that acquisition process is something that yeah, should be done. It’s of utmost necessity that has to be done.”

Even before India tested its anti-satellite ASAT missile codename Mission Shakti on March 27, 2019, the US was already aware as hinted by DRDO Chief in its press conference and was actively observing the developments.

During this time the US even denied visa to two of India’s top scientists – Secretary, Department of Defense Research and Development, Dr. G. Sateesh Reddy who is also the DRDO Chairman and eminent scientist Dr. S. Guruprasad – who were to attend an Indo-Pacific conference in Hawaii.

The most intriguing part of US visa denial is that US itself had invited these two DRDO scientists.

Soon after, at a Space Conference the US Defense establishment announced that it will carry out a demonstration of a Space Weapon, the details of which were not shared.

Although not expressed explicitly, experts believe this was in direct response to the Indian ASAT test.

It is believed these allies referred to by Hyten are members of the Five Eyes.

The Five Eyes is an intelligence umbrella based on the foundations laid by the spies of East India Company.

It emerged from an informal agreement related to the 1941 Atlantic Charter initially between United States and United Kingdom.

The secret treaty was renewed with the passage of the 1943 BRUSA Agreement.

In the following years it was extended to encompass Canada, Australia and New Zealand.

Much of the sharing of information is performed via the ultra-sensitive STONEGHOST network, which contains “the western world’s most closely guarded secrets.”

Later this operation was extended to Project Echelon.

India is the number one target of Five Eyes.

Most Indians may not be aware that in 1992, the present US President Joe Biden blocked the sale of Russian Cryogenic rocket engine technology to India describing it as being “dangerous”.

India was all set to master Russian cryogenic rocket technology when the United States – in cahoots with its moles in the Indian Intelligence Bureau – set in motion a series of events that implicated India’s leading space scientists on cooked-up espionage charges.

https://www.bitchute.com/video/0AMJM8qtbEM9/
This short film presents the history of extraterrestrial intervention on Earth, and how competing factions have warred over humanity's destiny. Learn how Earth became a prison planet under the control of a negative group of extraterrestrials and their human proxies ( aka the Cabal/Deep State) that have historically manufactured poverty, disease and war. Discover what lies ahead as positive extraterrestrials work with an Earth Alliance of international leaders from major nations to free our planet, and usher in a new age of prosperity, freedom and becoming part of a Galactic Federation.
Posted by SATHYA at Thursday, April 08, 2021