Incredible footage taken by a US Navy destroyer has been leaked 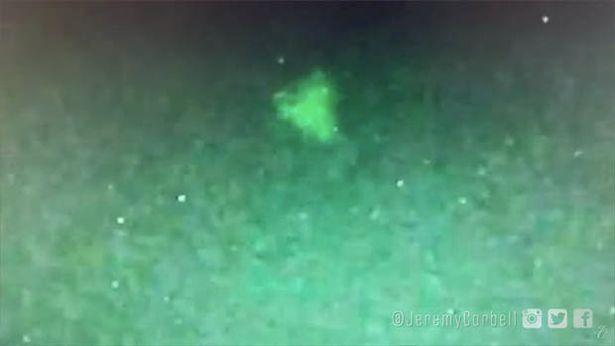 Incredible footage supposedly taken by a US Navy destroyer has been leaked appearing to show several pyramid-shaped UFOs swarming above the ship at night.

Filmmaker Jeremy Corbell – who has produced documentaries for the likes of Netflix – was anonymously sent the baffling video from July 2019 as well as detailed information on an alleged intelligence briefing conducted by the Pentagon into Unidentified Aerial Phenomena (UAP).

On his Instagram @jeremycorbell and website, he claims he has been able to verify their authenticity having interviewed “those who would have knowledge of the events” as well as working with renowned investigative journalist George Knapp.

The 18-second clip taken onboard the USS Russell starts by showing what appears to be three faint orbs hovering in the sky.

The camera then pans to show a fourth object before zooming in on it to reveal its apparent triangular shape.

It also seems to be flashing repeatedly and is surrounded by two other fainter shapes – although it is not clear if they are simply lens flares.

As well as the eye-opening video, Jeremy shared three photos taken by the USS Omaha of an unidentified “spherical” craft.

“It is noted that the ‘spherical’ craft was suspected to be a transmedium vehicle and was observed descending into the water without destruction,” he wrote. 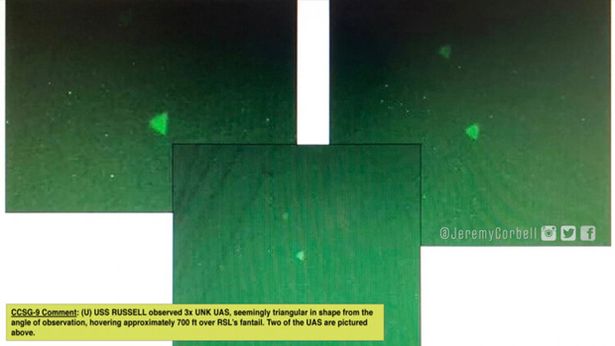 “It is noted that the ‘spherical’ craft could not be found upon entry to the water - and that a submarine was used in the search.”

The two incidents appear to tally up with a previous story run by The Drive of multiple destroyers being swarmed by “mysterious drones” off California over a number of nights.

The producer was also sent information on a third sighting on March 4, 2019 from an FA-18 pilot and a Weapons Systems Officer.

He claimed the WSO took “personal mobile phone images of UAPs” out of the cockpit of the fighter jet.

The three incidents were allegedly spoken about during a classified briefing conducted by the Office of Naval Intelligence (ONI) about the UFO/UAP presence on May 1, 2020, according to Jeremy.

"Those familiar with the briefing articulated to me that the goal was to de-stigmatise the UAP problem and to promote more intelligence collection regarding UAP incursions and encounters with active military deployments," he said. 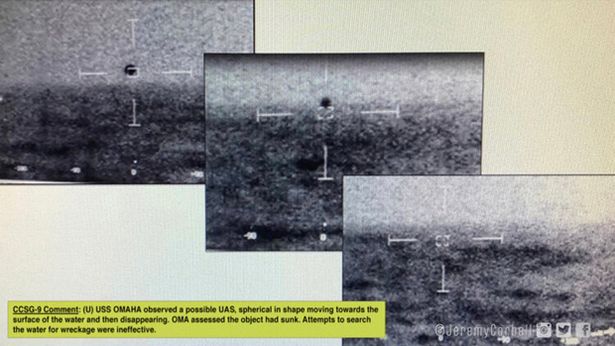 Speaking on his website, Jeremy explained the lengthy process he went through to “verify” the materials he received, before adding: “George Knapp and I were able to verify the materials you are about to consider. I can confirm their authenticity - as well as - the narrative supplied to me when they were presented.

“These are authentic photos and video from actual military encounters with UFOs - generated to educate high-level intelligence officers within our military on the nature and presentation of the UAP / UFO phenomenon.”

He concluded that he hoped the materials “will be representative of a unique moment in modern history; a possible turning point towards the rational and transparent approach of investigating and exploring the mystery of the UFO Phenomenon”.

Daily Star has contacted the Department of Defense and US Navy for comment.