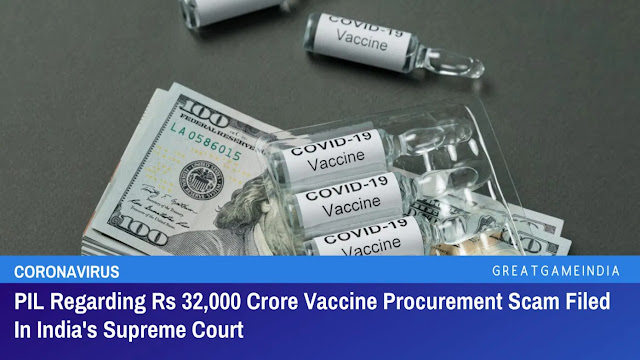 A petition has been filed in the Supreme Court today claiming that a scam of 32,000 crore rupees has been committed in the vaccination drive.

The petitioner said that corona vaccine has been prepared in western countries but their cost and price is not more than Rs 150-200.

However, the same vaccine is being given to the general public in the country at Rs 600.

Now that people above the age of 18 years are going to get the vaccine, the prices have also gone up.

According to an estimate, 800 million people are yet to get the vaccine. In such a situation, if the price of the vaccine is calculated, a scam of 32,000 crore rupees comes to light.

The petitioner also said that the National Scientific Force which was formed did not hold a single meeting in February-March. This is because assembly elections were being held in some states.

As reported by GreatGameIndia earlier, the US is planning to dump 60 million doses of the AstraZeneca vaccines on India to help us fight COVID-19.

These AstraZeneca vaccines however are unapproved for use in the US and hence the unwanted stock is being offloaded on Indians.

Moreover, this comes at a time when numerous European countries have stopped or suspended the use of AstraZeneca’s vaccine for causing bood clots and are launching lawsuits against the company.