The difference between initiation and awareness (prātibhā knowledge) 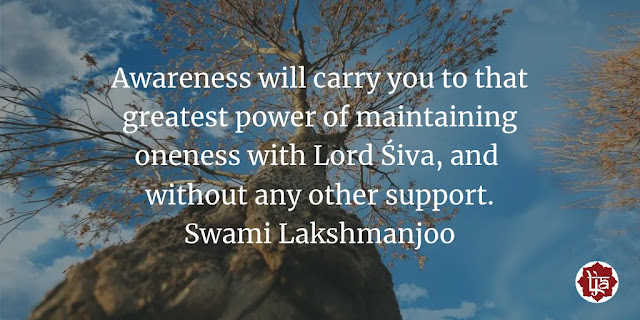 "Gurvāyattā tu sā dīkṣā this [inferior] initiation is dependent to master. But if once you maintain that prātibhā knowledge (prātibha knowledge means if you have command on awareness, when you have full command on awareness, don’t let anything creep in), and that awareness will carry you to that greatest power of maintaining oneness with Lord Śiva, and without any other support." And further down he clarifies what awareness really is...

Now there is a difference between automatic knowledge [prātibha] and initiation [dīkṣa].

For what purpose he is being initiated?

You see if you do practice with awareness, with real awareness (I don’t mean this so-called awareness), . . .

SWAMIJI: Break-less awareness, and scattering all other opposite agencies of thought.

JOHN: Which means, those things which would take you away from your awareness.

So by this, these are the ways and tricks of this māyā, that carry you away from that awareness.

So you have to be aware, bas, AWARE! Don’t let anything like the praise of awareness and nothing happen in between. Just go on doing with awareness, don’t let any thought come. This is what happens and everybody is crying, all disciples are crying, “we don’t achieve anything!”

What will happen to the master?

SWAMIJI: He has to suffer.

Gurvāyattā tu sā dīkṣā this [inferior] initiation is dependent to master. But this prātibhā, prātibhā knowledge . . . if once you maintain that prātibhā knowledge (prātibha knowledge means just if you have command on awareness, when you have full command on awareness, don’t let anything creep in), and that is kevalī bhāva siddhidaḥ that awareness will carry you to that greatest power, greatest power of maintaining oneness with Lord Śiva, and without any other support.

There are so many disciples, so many masters preaching this method of awareness, but nobody has understood it. Only one person understands in one billion disciples ‘what awareness really is’.

“This awareness is very nice, it has made me peaceful.”

This thought also, this is a foreign agency, foreign matter. This you should avoid. Go on, go on maintaining awareness, then you will see what will happen.

SWAMIJI: No, that point is subjective.

JOHN: Some people believe you hold that point–outward point–and they don’t put any stress on inner subjectivity.

SWAMIJI: No, this subjectivity, this is also one drawback in our understanding. Subjectivity does not reside inside only.

BRUCE P: Who finds out, who has to find out?

BRUCE P: How could it possibly find out?

SWAMIJI: As you are taught by your master.

BRUCE P: But I’m taught that it’s nothing I do?

BRUCE P: But it’s nothing I do. It’s God's grace shining.

It is very difficult sir.

So it is definitely you will be liberated by that.