This 2004 documentary film is a call for tribal solidarity. It was an awareness of the nearing trauma of two lakh people who are going to be displaced from their habitat under the proposed Polavaram Dam Project on river Godavari in Andhra Pradesh, India. The project was estimated to submerge four hundred villages and four thousand hectres of forest in Dandakaranya.

Large-scale projects often created islands of development in the midst of under-development perpetuating regional imbalances. Development paradigms are found to be discriminatory against tribal communities and other marginalized sections. Tribals constitute one third of the total displaced population in India.

The Koyas and the Kondareddis could sustain their traditions for thousands of years. Will they be able to protect them now? They are definitely not in a mood to accept displacement under Polavaram project. They are aware that displacement from their habitat results in total alienation and pauperization.

Most Of Papikondalu May Be Submerged

Even as the ambitious Polavaram dam gained steam on Friday with AP chief minister N Chandrababu Naidu launching the concrete works, the fate of stripenecked mongoose, discovered in the Papikonda hills earlier this year, hangs in balance. Papikonda forms part of the picturesque Eastern Ghats and a major portion of these hills will be submerged in the backwaters of the Polavaram dam across the Godavari.

There are a number of plant and animal species endemic to the Papikonda hills and they will lose a major portion of their unique habitat once the dam is ready . The stripenecked mongoose, which is a native of the Western Ghats and Sri Lanka, was discovered in Eastern Ghats earlier this year through camera trappings. This is the first time that this variety of mongoose has been found outside the Western Ghats. Wildlife enthusiasts fear that the stripenecked mongoose will lose its new habitat even before zoologists could fully explore the animal. Incidentally , the animal was featured in the latest issue of the `Journal of Threatened Taxa` published on December 26, the day AP government received Central funds for Polavaram.

Research scholars, Kum patla Balaji from the department of zoology in Andhra University , Visakhapatnam, and Jarugulla Eswar Satyanarayana, from the department of environmental sciences in Acharya Nagarjuna University, Guntur, have discovered the stripe-necked mongoose in the Papikonda hills. They not only obtained camera trappings but also sighted the animal in the Papikonda sanctuary . Though the International Union for Conservation of Nature (IUCN) in its latest `Red List' classified stripe-necked mongoose as “least concern“, wildlife activists argue that the Polavaram dam will rob the animal of its new habitat.

Besides the new variety of mongoose, Balaji and Satyanarayana also spotted rare animals including the Gaur, Indian spotted eagle and Indian peafowl. “Local tribes Konda Reddy , Koya Dora and Valmiki call the stripe-necked mongoose `Yentawa mungisa'. There was a historical sight-record from the Horsley Hills in the Eastern Ghats but hitherto dismissed as doubtful. There has been no records of the stripe-necked mongoose from the entire range of the Eastern Ghats. Hence, this is the first photographic evidence,“ they said.

The researchers emphasized the need for a thorough research on the conservation status of the stripe-necked mongoose. 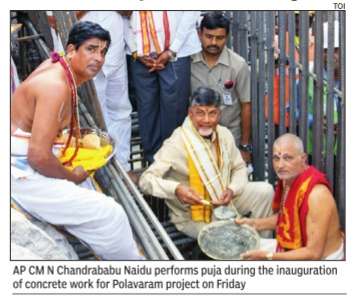 About 100 Megalithic Stone Were Discovered Last Week, Efforts On To Preserve Relics

A 10,000-yearold megalithic burial site with around 100 graves discovered last week in East Godavari district will be history again even before archaeologists can study them in detail thanks to the massive Polavaram dam coming up across the Godavari. The stone or cist graves dating back to 8th millennium BC at Rudramakota and neighbouring villages of Velerupadu mandal were unearthed by AP state archaeology officials.

The Polavaram project, which gained steam on Monday after the National Bank for Agriculture and Rural Development (Nabard) sanctioned a loan of 1,981 crore, will also sink about a dozen old temples dating back to Kakatiya dynasty of 12th century.

Several villages in Velerupadu mandal, which was earlier part of Khammam dis trict but was merged with East Godavari as part of the AP State Reorganisation Act, 2014, will also be submerged in the backwaters of Polavaram. The AP government plans to complete the ambitious project before the general elections in 2019.

The region surrounding the Godavari on AP-Telangana border is rich in early man stone graves. Several megalithic burials have been discovered in the region in the past few decades.

“There are about 100 megalithic burials on a hillock in the village. Besides the cist graves at Rudramakota (Rudrakota), we also discovered burials at Rayalipet of Yetapaka mandal. The stone burials are west of Bhadracha lam, about 12 km away . Many graves are in disturbed condition. We have identified 17 villages for excavation,“ said East Godavari archaeology technical assistant Timma Raju, one of the three-member team that discovered the graves.

Raju said that the department plans to preserve parts of the graves at another location before its submergence.While artefacts and other material in the graves would be sent to state museum for display. The ancient temples located at Kukunoor, Vaddigudem, Motigadda, Iravendi and other places that fall under the Polavaram submergence area would also be relocated. “The study of these graves will give us an insight into the the social, economic and religious habits of our ancestors. We need to study them in detail and preserve them as their history will be lost forever under Polavaram reservoir,“ he said.