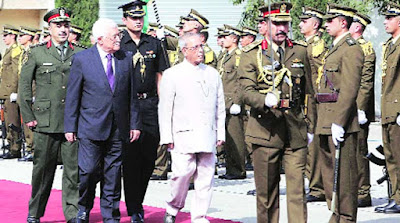 The matter assumed significance as President Mukherjee, who is due to inaugurate a state-of-the-art IT Centre at Al-Quds University on Tuesday, planned to gift these devices as part of the Indian government’s plan.

Israeli authorities have denied clearance to four communication systems meant as a gift from India to a Palestinian university’s Information Technology (IT) department. The matter assumed significance as President Pranab Mukherjee, who is due to inaugurate a state-of-the-art IT Centre at Al-Quds University on Tuesday, planned to gift these devices as part of the Indian government’s plan.

The four communication systems were meant to be crucial components of the new IT centre. While Israeli customs on Monday cleared the passage of 30 computers, which were stuck at the Ashdod port, to be moved to the university, the communication systems remained at the Ben Gurion airport and were unlikely to be allowed to reach the IT Centre.

When asked about the delay, Israel embassy spokesperson Ohad Horsandi said: “While 30 computers were cleared by the customs authorities..my sense is that the communication systems don’t adhere to rules and regulations of Israel.”

He added that the same set of rules applied to both Israel and Palestine. He also gave the example of satellite phones, which are not allowed by the Indian government to enter the country.

Meanwhile, the computers were expected to reach their destination in time for Mukherjee’s planned inauguration, officials said. At the event, the President will also be conferred an honorary doctorate by the Al-Quds University.

Asked about the delay in clearing the shipment of computers, Horsandi said: “It was the decision of the Indian government (to gift the computers and communication systems). When Israel’s foreign ministry was approached, we expedited the process.”

The visit to Palestine is the second-leg of the President’s historic three-nation West Asia tour, which will also take him to Israel.

When asked about Mukherjee’s statement supporting the Palestinian cause from Jordan, the Israel embassy spokesperson said that the Indian position was “not a surprise” to them.

“India’s support for the Palestinian cause and maintaining good relations with Israel are not interconnected. I don’t think one affects the other,” he said.

India has always been a leading partner in educational support and cooperation to Palestine. It has been at the forefront of the capacity building process in Palestine, extending hundreds of scholarships to Palestinian students under the ITEC programme to enable them to take up professional programmes in universities across India.