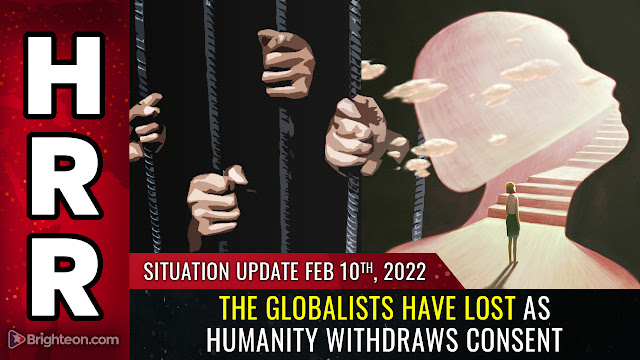 (Natural News) The Canadian truckers and freedom protesters deserve huge credit for bringing humanity to a tipping point against tyranny. Thanks to the courage, determination and dedication to peace that’s demonstrated by Canada’s protesters, humanity is withdrawing its consent from government tyrants all over the world.

Globalism is crashing, and centralization of power is being ripped to shreds. The entire model of globalism is dead, and no human being that’s aware and alive right now wants to return to a society structured as a top-down, totalitarian, centralized control system of global enslavement run by a few hundred hyper-wealthy freakazoids like Zuckerberg and Gates.

What I’m trying to explain here is that this is about much more than covid vaccines or lockdowns. This is about humanity rising up against the very idea of centralized government, corporations, media and tech giants. The era of centralization has come to an end, and the free people of the world have begun the process of dismantling it by simply withdrawing their consent.

Consider the impact of the realizations now spreading across the world:

What we’ve all lived through over the last two years is corrupt, deceptive, anti-human institutions waging war against truth and humanity, showing their true cards and exposing the depth of their evil.

And that’s why the people of the world are now peacefully rising up and demanding an end to the entire centralization structure of globalism. It is the centralized control over media, information, government and “science” that brought us all to the brink of destruction. Absolute power corrupts absolutely, and for the past several generations, the people have handed over far too much power to governments, science journals, media giants and tech platforms.

Now, the people are taking their power back.

And they’re doing it, ironically, by mimicking the mRNA spike protein blood clots in the real world: Clogging bridges, roadways and cities, bringing society to a standstill with nothing but trucks, horns and raw courage.

The message is clear: You try to put clots into our blood and we’ll put traffic clots across your cities.

The evil governments, predictably, call these peaceful protesters “terrorists” — even as the governments themselves are carrying out acts of terrorism and mass murder against their own people. So let’s take a look at some of the very real people behind the Ottawa protests. The masterful portrait photos shown here are from Dan Aponte, a Canadian photographer who brilliantly captures the humanity of the freedom protesters in Ottawa. This is flat-out the most impactful photography I’ve seen in years. Read more details about these truckers and peaceful protesters at:

Today’s Situation Update podcast covers all this in more detail. Definitely hear the last 30 minutes of the podcast for an inspiring analysis of why we’re all here right now in this pivotal time of human history:

Find more information-packaged podcasts each day, along with special reports and emergency updates, at: