Be Alert for Zodiacal Light 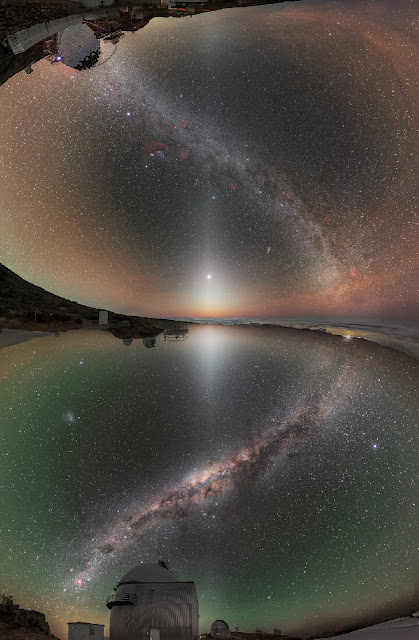 Here is inspiration from 2016/2020 project. Two photographers, two hemispheres, one sky. The view to the night sky is limited by our Earth, meaning in one time at one place we can only see a half of the starry spheric view, the second one is below the horizon. But what if – apart from travelling away from Earth – there is a way to complete the whole view. Then it could look like this. Of course, some (better precise) planning is needed to make it happen. You have to think about what follows what and when is the time of view following the other view from the other hemisphere. Me and my friend, great TWAN photographer Juan Carlos Casado, focused on specific part of the year, when from two major observatories of almost same latitude, but opposite ways from equator, the column of the zodiacal light appears almost upright over the horizon. While mine view from ESO La Silla Observatory was taken in April (2016), Juan made it happen to capture the northern part from IAC La Palma Observatory on February (2020). Both views, sitched together in one, finally reveal the whole night sky scene around, using Earth’s horizon to block the bright sun from the view. More info here: https://www.petrhoralek.com/?p=5529

BE ALERT FOR ZODIACAL LIGHT: The season for Zodiacal Light has begun. In dark sky sites around the world, people are noticing a pale triangle of light lancing into the night sky. After centuries of wondering, astronomers have only recently learned that it comes from Mars. Next week will bring of the best displays of the year. Find out more on today's edition of Spaceweather.com.

Solar Flare Alerts: Sign up for Space Weather Alerts and get instant text notifications when solar flares are underway.