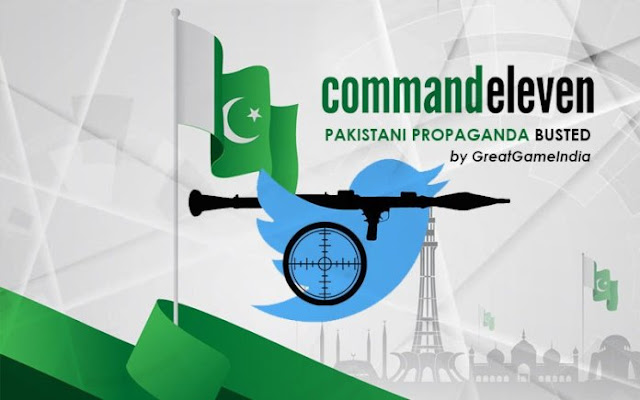 On May 14, 2019, in our extensive tracking operation GreatGameIndia busted a Pakistani propaganda unit CommandEleven peddling fake news disguised as ‘operational intelligence’ from behind enemy lines under the cover of OSINT (open source intelligence), under guidance of retired Pakistani Generals directed by British and Israeli Generals headquartered in London.

An independent social media tracking operation that commenced after the February 26 Balakot air strikes has found that there are at least eight Twitter handles that pose to be ‘independent observers’ behind Pakistani defence lines but are spreading unconfirmed news, many at times fake.

It was from these handles that fake reports on the death of Jaish-e-Mohammed Masood Azhar originated, besides the alleged Indian attacks on Fort Abbas and Sialkot in Pakistan.

An investigation by ‘GreatGameIndia’, based in Hyderabad, found a couple of these handles being managed by social media intelligence (SOCINTEL) operators under the guidance of retired Pakistani generals.

On March 2, the Twitter handles put out reports saying Masood Azhar had been killed in the Balakot air strikes. The ‘story’ was picked up by many media houses who quoted “top intel sources”.

The source of the story was later detected to be a blogpost, ‘Masood Azhar is DEAD: Confirmed; along with a top rank former ISI officer’, which was originally floated by the website ‘Times Prime’.

Another instance was the fake news that the Indian Air Force had carried out another air strike, this time across the international border near Fort Abbas in the Cholistan desert in Pakistan’s Bahawalpur district.

The information was spread by a handle F Jeffery (timestamp 4.01 pm, March 4). India denied the report.

On the day of the air strikes, a Twitter handle reported artillery firing from across the Line of Control in Sialkot. Mr Shelley Kasli, co-founder of GreatGameIndia, said, “We began tracking certain suspicious Twitter handles after the Pulwama attack. They remained low until the Balakot air strikes. The morning after, loads of (unconfirmed) information was being pumped in through these shady networks, posing as neutral observers from behind enemy lines.”

Mr Kasli said, “Certain Indian journalists interacted with these handles and the information was reported by their media houses quoting ‘top intel sources’. When their followers flagged them on Twitter regarding the suspicious nature of the information the journalists were forced to change the line.”

On the claim that certain handles were managed by retired Pak Generals, the investigators found that the account Faran Jeffery, who purported to be a neutral observer, was deputy director and head of the South Asia desk at the Islamic Theology of Counter Terrorism, a think tank headquartered in London. What is not mentioned is that he is associated with a Pakistani national security think tank called CommandEleven.“CommandEleven is a Pakistani propaganda outfit created and directed by retired Pakistan Generals specialised in information warfare. Its old website CommandEleven was brought down right before the Pulwama attack and all traces of Faran Jeffrey deleted,” Mr Kasli said.

He said India was the target of sophisticated information warfare. “In the words of Lieutenant General H.S. Panag (retired) we lost the perception war in the first 60 hours. A huge chunk of the information originated from CommandEleven,” said Mr Kasli. 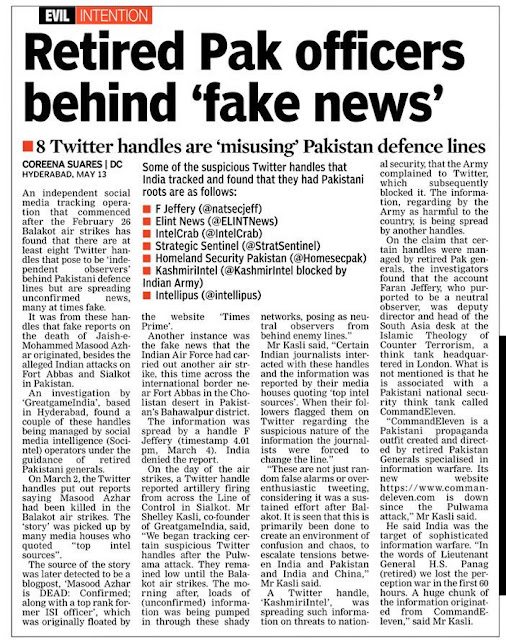 As reported in Deccan Chronicle on May 14, 2019 under the headline – Retired Pakistani officers behind ‘fake news’ and by Telugu daily newspaper Eenadu under the headline భారత్‌పై పాక్‌ ‘కమాండ్‌ ఎలెవన్‌’ కుట్ర..! (Pakistani Command Eleven Conspiracy Against India Exposed). 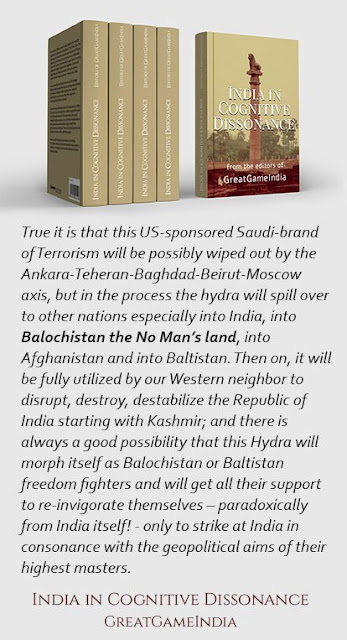 For more than 2000 years a war is being waged for the control of India and the access routes connected to it. The Turkey Coup is the beginning of the end of the Great Game, as it is known. With Russia slipping out of their hands, the eyes were set on an unfathomably resource-rich country, which even after thousand years of non-stop plunder and looting still captures the imagination of one and all, thugs, thieves and robber-barons alike with her yet-unknown massive economic resources potential — that country is India.

India in Cognitive Dissonance is a hard-hitting myth-buster from GreatGameIndia. A timely reminder for the decadent Indian society; a masterpiece on Geopolitics and International Relations from an Indian perspective – it lays bare the hypocrisy taken root in the Indian psyche because of the falsehoods that Indian society has come to accept as eternal truth.