Hack the plan, not the trees 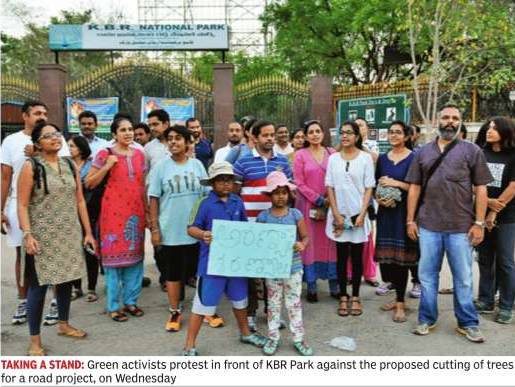 It's not the trees but the plan ­to build multilevel flyovers ­that has to be hacked! At the risk of sounding radical let me say it again. Hack the plan and not the trees.

Road widening and road building programmes are often proposed as a solution to traffic congestion, but there is clear evidence that these programmes are ineffective.

Case studies in the UK and the Netherlands have amply proved that the benefits from reduced congestion and shorter journey times are often short-lived as new road network capacity is taken up by new traffic growth. So build flyovers and promote use of private vehicles! Remember the Chennai story?

The city of Chennai earned the title 'city of flyovers', thanks to 21 elevated urban corridors which it hosts. It's common knowledge that despite the massive investment, the flyovers have failed to solve the problem of traffic congestion in the city .For the investment made, experts believe that the city could have strengthened its public transportation, or laid 2,000 km of dedicated cycle lanes across Chennai's streets or built an equivalent BRT (Bus rapid transit) network of 150 km.

For some of us who love Hyderabad for its beauty , here's some bad news. Flyovers can scar the urban fabric! Cairo is one sad example of flyovers marring the beauty of a city and please remember, it's just one example.

It is not just the beauty of the city or the wasted investment or the enhanced congestion, but it's also about health. Dust and other air pollution from construction can impact greatly the health and quality of life of people, with some studies reporting an increase in mortality due to chronic obstructive pulmonary diseases and cancer. Cities in China have seen a rapid rise in neurological diseases like Alzheimers and stress-induced bipolar disorders due to noise and air pollution.

The phenomenon of flyover construction is best understood from the book 'Road to Ruin'. It says that roads are an invention that humans have come up with (short of aerial carpet bombing) to destroy community quality of life. As mentioned before, roads do promote auto-dependency and as communities do not interact closely like they do in 'walkable neighbourhoods', the quality of life hits a downward spiral. And that, in my opinion, is toxic to the health of a city.

In short, you as a citizen are getting ready for the future ­ with solar rooftops, rainwater harvesting pits, kitchen garden in balconies, locally-sourced material for your homes, bamboo furni ture, conservation classes, ozonized vegetables and pranayama for quality of life... And, the city is killing green, inviting concrete, ruining the thermostat, polluting air, smogging your lungs. Case studies prove it wrong. 'Science of City' does not support it. Citizens don't want it. Then why I pray this plan?

By Karuna Gopal
The Times of India (Hyderabad)
(The author is President, Foundation for Futuristic Cities)
Posted by SATHYA at Thursday, April 28, 2016