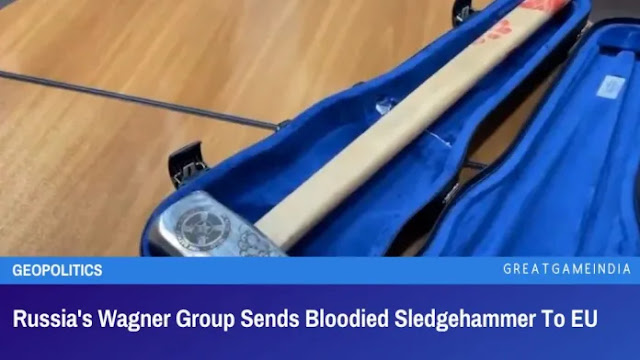 A lawyer in a suit is seen in a Telegram video bringing a violin case into the empty room and setting it down on a table. Russia’s Wagner Group essentially sends a bloodied sledgehammer to the EU.

Mercenaries from Russia’s Wagner Group delivered a “bloodied” sledgehammer to the European Parliament in a violin case after members began the process of designating them as terrorists.

Because its members have used sledgehammers to kill while on missions abroad, the Kremlin-affiliated outfit has adopted them as an unofficial insignia.

In a video that Wagner Group uploaded on one of its Telegram channels, a suit-clad attorney brings a violin case into an empty room and sets it down on a table.

He reveals a finely polished sledgehammer when he raises the lid of the violin case. The Wagner’s emblem has been carved on the head, and blood-red paint has been splattered into the handle.

Yevgeny Prigozhin, the financier and founder of Wagner Group who is also referred to as Putin’s chef, said in a separate statement that he was sending the sledgehammer to the European Parliament as “information” before MEPs made a decision about whether to designate Wagner Group as a terrorist organization. Additionally, he expressed his sorrow over the possibility.

Due to its invasion of Ukraine, the European Parliament this week classified Russia as a terrorist state.

Since he owns a catering business and has been pictured serving Kremlin guests alongside the Russian president, most notably George W. Bush when the latter visited Moscow in his capacity as US president twenty years ago, Mr. Prigozhin has earned the moniker “Putin’s chef”.

The sledgehammer has not yet been delivered to the European Parliament, according to individuals who spoke to The Telegraph, and they believed it might be a publicity ploy.

“If anyone needed further proof of Russia being a state sponsoring terrorism: Prigozhin just sent it in a violin case,” said Daniel Freund, a German Green MEP.

Wagner Group has a reputation for doing unsightly things, including releasing footage of its fighters holding musical instruments while standing in bombed-out cities in east Ukraine’s Donbas.

The Wagner mercenaries describe themselves as musicians and their force as an orchestra.

One of the group’s Russian special forces founders, who went by the callsign “Wagner” gave it its name in 2014.

“Instead of a horse’s head, a sledgehammer. ‘Godfather’ games with a St Petersburg pronunciation,” Moscow socialite and TV star Ksenia Sobchak informed her 1.4 million subscribers. Sobchak left Russia last year after being charged with embezzlement.

In a video that Wagner released this month, one of its fighters can be seen slamming the head of a prisoner who had signed up to fight in Ukraine but had instead tried to defect to the Ukrainian side. In other videos, Wagner mercenaries may be seen using sledgehammers to execute hostages taken in the Middle East.

It appears that Mr. Prigozhin embraces this reputation. At first, he praised the sledgehammer murder of the prisoner, calling it “an excellent piece of editorial work.”

Since the Russian invasion of Ukraine in February, the Wagner Group has gained notoriety.

Wagner has served as a semi-official auxiliary unit for the Russian army despite suffering significant losses.

Despite the fact that it is technically against the law to fight for a mercenary organization in Russia, the Kremlin, which had previously denied Wagner’s existence, has now permitted it to publicly recruit throughout the country.

Wagner, led by Mr. Prigozhin, has also actively recruited from jails. According to one estimate, up to 23,000 prisoners are currently fighting for Wagner in Ukraine.

EXPLOSIVE: Here’s what was uncovered in Hunter Biden’s iCloud Hack

The U.S. Shale Boom Is Officially Over