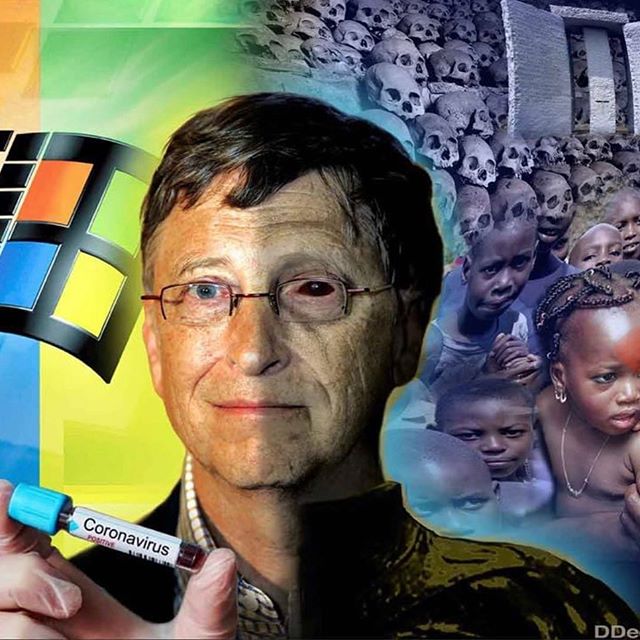 We don’t need Rahm Emanuel to tell us a crisis shouldn’t go to waste. It’s a strategy that probably got off the ground a hundred thousand years ago. The other half of it is, create the crisis to begin with. Then don’t waste it.

The Bill Gates plan involves a mother of all vaccines for COVID, mandated across the globe, before the lockdowns end. That’s his psychopathic wet dream. Then, coming in behind that, his lackey, the World Health Organization, along with the professional liars at the CDC, will add—“we must mandate EVERY vaccine…”

To pull off a mandated global vaccine for eight billion people takes a manufactured crisis.

Fake virus plus real lockdown is the crisis.

You don’t think that one up overnight. You plan. You drill, and you organize. You put all your ducks in a row. You prepare, in order to become Stalin and Mao.

Then somebody has to break the ice.

In this case, it was the Chinese regime—locking down 50 million people overnight in three cities. Moving quickly to a hundred million.

Then follow up with a dire prediction. Where will that come from? “Let’s dust off that broken-down hack, Neil Ferguson. He’ll give us what we want. He always does. Tell him to slap together one of his computer models. You know, predictions of lots of deaths up the road. Half a million in the UK, a couple of million in the US. Fauci will salute it like money.”

Drive people back into their homes. Put them out of work. Shut down businesses. Wreck economies.

NOW, hold out the carrot. The vaccine.

Note: A new COVID vaccine could be used to alter the genetic makeup of humans. That’s exactly what the emerging (and as yet unlicensed) DNA technology does. It’s a form of gene therapy, now in clinical trials—and, officially, one of the “competing candidates” for a COVID vaccine.

The New York Times, 3/10/15, “Protection Without a Vaccine.” It describes a frontier of research. Here are key quotes that illustrate the use of synthetic genes to “protect against disease,” while changing the genetic makeup of humans. This is not science fiction:

“By delivering synthetic genes into the muscles of the [experimental] monkeys, the scientists are essentially re-engineering the animals to resist disease.”

“’The sky’s the limit,’ said Michael Farzan, an immunologist at Scripps and lead author of the new study.”

“The first human trial based on this strategy — called immunoprophylaxis by gene transfer, or I.G.T. — is underway, and several new ones are planned.” [That was five years ago.]

“I.G.T. is altogether different from traditional vaccination. It is instead a form of gene therapy. Scientists isolate the genes that produce powerful antibodies against certain diseases and then synthesize artificial versions. The genes are placed into viruses and injected into human tissue, usually muscle.”

Here is the punchline: “The viruses invade human cells with their DNA payloads, and the synthetic gene is incorporated into the recipient’s own DNA. If all goes well, the new genes instruct the cells to begin manufacturing powerful antibodies.”

Read that again: “the synthetic gene is incorporated into the recipient’s own DNA.” Alteration of the human genetic makeup. Permanent alteration.

The Times article taps Dr. David Baltimore for an opinion:

“Still, Dr. Baltimore says that he envisions that some people might be leery of a vaccination strategy that means altering their own DNA, even if it prevents a potentially fatal disease.”

Yes, some people might be leery. If they have two or three working brain cells.

Even if we (falsely) assume this is an epidemic caused by a virus, the official case numbers—as I’ve described in a recent article—do NOT warrant nearly as much concern as annual official flu numbers.

And, of course, NO lockdowns faintly resembling what we have now have ever been recommended, much less enforced, for flu.

And there is no mandated global flu vaccine.

Therefore, a planet-wide, mandated COVID vaccine, as a get-out-of-jail-card, is absurd.

The freedom to reject the vaccine MUST be protected.

The actual conspiracy theorists—Gates, WHO, CDC—who invented the conspiracy, must also be rejected.

The author of three explosive collections, THE MATRIX REVEALED, EXIT FROM THE MATRIX, and POWER OUTSIDE THE MATRIX on May 6, 2020 https://nomorefakenews.com/

https://youtu.be/Kji5d3MOrQM
Vaxxed - From Cover Up to Catastrophe
Posted by SATHYA at Thursday, May 07, 2020