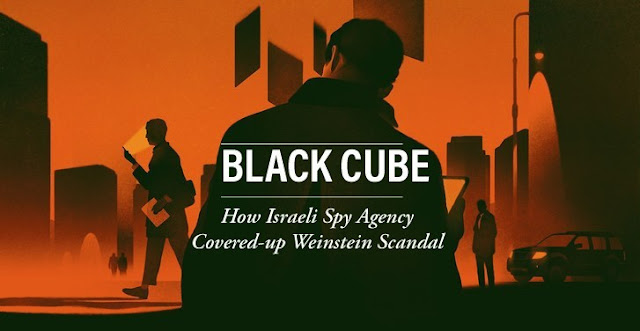 Black Cube was founded in Tel Aviv, in 2010, by veterans of a secret Israeli intelligence unit. Meir Dagan, the former director of Mossad, sat on the company’s advisory board until his death in 2016. Trained in psychological operations designed to manipulate a mark, this is how Black Cube – the Israeli Spy Agency covered-up the Harvey Weinstein scandal.

Ronan Farrow’s new book Catch and Kill is an eye-popping look at his experience reporting on Harvey Weinstein’s history of sexual assault. Farrow spent over a year pursuing the story, talking to multiple women whom Weinstein had assaulted and painted a picture of an abusive Hollywood mogul who was protected from consequences by an army of loyalists. He started working on the story as a reporter for NBC but it soon became clear that the network was not fully behind the effort to reveal one of the darkest open secrets in Hollywood. Every phase of the reporting process was an uphill battle as the network tried to get him to “pause” his reporting.

It was only later that Farrow learned that NBC wasn’t the only one throwing obstacles at him. Harvey Weinstein knew what he was doing and he hired an elite private investigation firm to try and thwart Farrow’s work. The Israeli company Black Cube followed Farrow for months and sent various undercover agents to try and meet with him to solicit information about his project. Not only were they assigned to surveil Farrow, but they were also infiltrating the lives of the women who were speaking with Farrow about Weinstein. One agent successfully gained the confidence of Rose McGowan, got a copy of her memoir before it was published and delivered the manuscript directly to Harvey Weinstein. For this work, Black Cube received payments from the Weinstein Company that are reported to have been over a million dollars.