The Galaxy is Soaked with Water-Rich Alien Planets 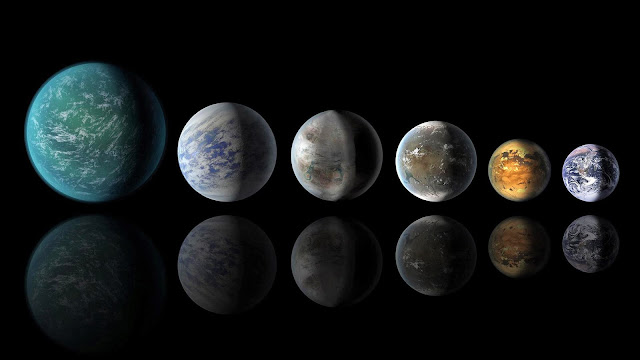 (This artist's conception shows habitable-zone planets with similarities to Earth. From left: Kepler-22b, Kepler-69c, Kepler-452b, Kepler-62f and Kepler-186f. Last in line is Earth itself.)

Midsize alien planets - those two to four times larger than Earth - tend to harbor huge amounts of water, according to the research. Indeed, some of these exotic worlds are probably up to 50 percent water by weight.

(Our seemingly wet Earth, by contrast, is just 0.02 percent water by weight.)

"Our data indicate that about 35 percent of all known exoplanets which are bigger than Earth should be water-rich," study leader Li Zeng, a postdoctoral fellow in the Department of Earth and Planetary Sciences at Harvard University, said in a statement.

"It was a huge surprise to realize that there must be so many water worlds."

Li Zeng and his colleagues analyzed data gathered by NASA's Kepler space telescope, which has discovered about 70 percent of the 3,800 known exoplanets to date, and the European Space Agency's Gaia spacecraft.

The study's (Growth Model Interpretation of Planet Size Distribution) researchers used this information to develop a model explaining the relationship between an exoplanet's mass and its radius.

"The beauty of the model is that it explains just how composition relates to the known facts about these planets," said Zeng, who presented the results in Boston Friday (Aug. 17) at the Goldschmidt Conference, a high-profile annual geochemistry meeting.

The team's model suggests that alien worlds about 1.5 times the size of Earth or smaller tend to be rocky, whereas those that are a bit bigger are generally water worlds.

(The planets in the next size class up are primarily gaseous. For example, Neptune, the smallest gas giant in our solar system, is about four times wider than Earth.)

But these alien water worlds are not just flooded versions of a pumped-up Earth.

"This is water, but not as [it is] commonly found here on Earth," Zeng said.

"Their surface temperature is expected to be in the 200 to 500º Celsius [390 to 930º Fahrenheit] range. Their surface may be shrouded in a water-vapor-dominated atmosphere, with a liquid water layer underneath.

Moving deeper, one would expect to find this water transforms into high-pressure ices before reaching the solid, rocky core."

And the agency's $8.9 billion James Webb Space Telescope (JWST), which is scheduled to lift off in 2021, may be able to characterize the atmospheres of some of these worlds, he said.

"It's amazing to think that the enigmatic, intermediate-size exoplanets could be water worlds with vast amounts of water," TESS Deputy Science Director Sara Seager, a planetary scientist at the Massachusetts Institute of Technology, said in the same statement.

"Hopefully, atmosphere observations in the future - of thick steam atmospheres - can support or refute the new findings," added Seager, who was not involved in the study.