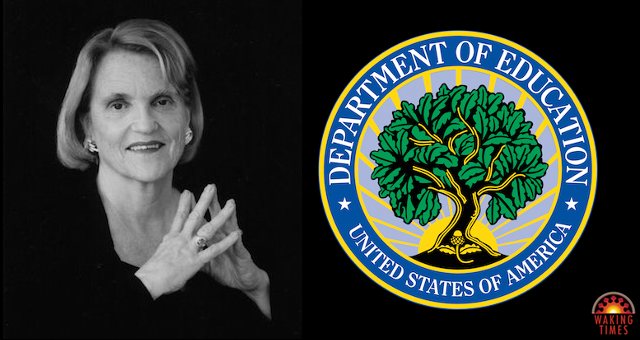 “I was taught really how to con the community.” ~Charlotte Thomson Iserbyt

Charlotte Iserbyt has a long history of work with the U.S. Department of Education as a former policy advisor during the Reagan administration, as well as having worked for local school districts. In her seminal book, The Deliberate Dumbing Down of America, she tells the story of how her interest in educating children was overshadowed by the dark truth of the modern education system, and the top-down plan to overhaul education to achieve statist aims.

As the reality that education is used against us sinks in for everyday Americans, her work becomes ever more valuable, and of the many startling truths she has revealed, one fact stands out as particularly relevant to today’s environment, where the nanny state increasingly usurps authority over individual and family decisions, turning us into de facto agents of state control.

Speaking in an interview, Iserbyt explains how school system functionaries are trained to identify resistors, the parents among us whom would dare to object to the unreasonable changes in schools and educational programs.

‘I was trained to identify the resistors. The resistors to the sex-ed, drug-ed, alcohol-ed, suicide-ed, death-ed, those sgood, smart Americans who realize that anything that education hanging off the end of it is probably not what they’re looking for. I was trained to identify those good people, and to go up against them, and actually to go and try to get them to join us through the group process system. Make them feel important, get them on a committee… and that just blew my mind.” ~Charlotte Iserbyt

How does the school system manage to force programs onto local districts which would never want such programs? How do they con people into accepting new ideas for education that really don’t make sense for their communities?

The answer is that the system actually trains members of the school system to identify, target, and recruit the right people in a community, so that others will play follow-the-leader with people whom they trust.

“Not only was I trained to identify the resistors, I was trained to go to the improtant people, high profile, highly thought of people in the community, with the Rotary, Chamber of Commerce Garden Club, you name it. The different groups in our towns. Go to them and convince them of the importance of these new programs… and get them on your side, because when you can get the leadership in a community to go along with it, then the newspaper comes in and says, a committee’s been set up with the head of the Rotary, and this and that, and they’re all getting behind this task force to discuss whether we’re going to have a new sex education program. And then, when Mary Jones, who would ordinarily think, why would we want to have a sex education program when we don’t have any problems with kids having sex or anything… she reads that her best friend who’s the head of the Garden Club is on this committee… it must be OK.” ~Charlotte Iserbyt

Iserbyt talks briefly about the training manual for district employees which teaches them to be good agents of the state. Written by Professor Ronald Havelock, Innovations in Education: A Change Agent’s Guide is the manual for turning the American school system into a Stasi-like program of group think and mindless acquiescence. Yes, there really is a manual which teaches educators how to monitor and interdict parents who wish to have a say in how their children are educated, and according to Iserbyt, it is quite revolting, and very effective.

The end result of a government program which targets and neutralizes dissenters and resistors is nation-wide conformity with educational objectives which serve the interest of the corporate state while failing children and families.
https://youtu.be/DDyDtYy2I0M
Isaac Davis, Staff Writer
Waking Times

Isaac Davis is a staff writer for WakingTimes.com and OffgridOutpost.com Survival Tips blog. He is an outspoken advocate of liberty and of a voluntary society. He is an avid reader of history and passionate about becoming self-sufficient to break free of the control matrix. Follow him on Facebook, here.

This article (Whistleblower Explains How Education System Targets ‘Resistors’) was originally created and published by Waking Times and is published here under a Creative Commons license with attribution to Isaac Davis and WakingTimes.com. It may be re-posted freely with proper attribution, author bio, and this copyright statement.

~~ Help Waking Times to raise the vibration by sharing this article with friends and family…
Posted by SATHYA at Tuesday, March 21, 2017