Occult Man and his search for his true nature 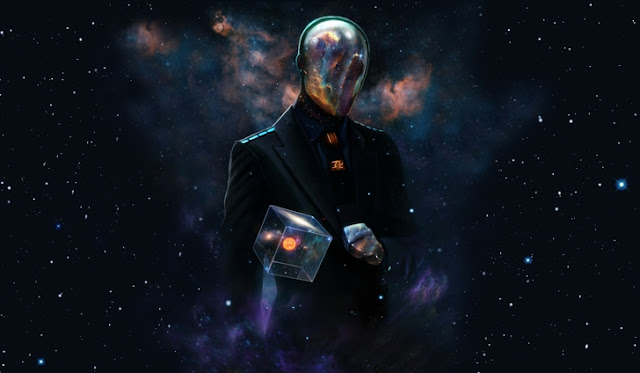 The word “occult” is frequently associated with a secret society, and it is given a negative twist by pitting it against organized “clean” religion or “totally rational” science.

But the Latin root of the word comes from the verb, “to hide.” That’s all.

Occult man is hiding his true nature from himself.

Legion are those who invent these “debt scenarios” for themselves, and they rarely give them up, regardless of the consequences. They prefer to imagine they “win by losing.”

When Occult Man embarks on the journey to find his true nature, he enters a labyrinth. Sooner or later, he needs to realize the maze is composed of all possible answers to his self-inquiry. How to choose one answer above all others? How to discern?

Nevertheless, despite the difficulties, he will choose. He will clutch an answer, he will adopt it, and he will begin to live on that basis. He will say, “This is my true nature,” he will climb into that conveyance and drive it down the road.

After a certain period, he will see its limitations, he will experience first-hand the pressure of those restrictions, and he will look for a more inclusive answer to his inquiry.

As this process of accepting, testing, and rejecting answers continues, he will become aware that each solution to what-is-my-true-nature gives birth to a space that is defined—and his primary role is to fit himself into that space.

In the majority of cases, Occult Man eventually talks himself into accepting a space and learning how to adapt to his position in it. It is as if, all along, he has been asking himself, “What is my place?”

Relatively few people are prepared to admit this is a loaded question. They would rather adhere to one of thousands of “philosophies” which are determined to tell Occult Man what his place is.

According to this sort of guidance, Occult Man is supposed to take pride in finding that place.

For those who can avoid this end, there remains a less-defined path. “Where do I go? What do I do? What am I looking for?”

What about looking within? As interesting as this option may seem, and as rooted in tradition, what results does it confer?

Either Occult Man looks within and sees, disappointingly, spaces populated by random objects and ideas, or he presupposes what he is going to discover, and then discovers it. Needless to say, such sleight of hand isn’t the means for finding his true nature.

Now we come to the threshold of a shift into another dimension of experience. Regardless of how long the journey has taken so far, now Occult Man begins to examine his very role as the searcher. The seeker. The discoverer.

Is the whole paradigm of questioner-question-answer able to yield up the effect of finding his true nature?

At every turn, it seems as if he’s been looking for some sort of content or material or information that will unlock the door. Or perhaps he needs an experience that will shock his system into a new realm of perception.

All along, he has been searching for some kind of reality that is already there. A deeper reality, a more elevated reality. Concealed, out of view. Hidden.

Which is why he is Occult Man. Because of the way he has been proceeding.

But suppose…there is no such hidden reality which is his true nature. Suppose that is the cosmic joke.

And suppose, instead, he is the maker of realities.

Suppose that is his true nature.

Suppose every system and traditional belief avoids putting the finger on his true nature.

Suppose he has no pre-defined place.

Suppose the shape and character of societies and civilizations on Earth flow from the inability of individuals to see their true nature?

There is much more to say about this subject, but I’ll leave it here for now—except to mention that everything I’ve authored in my collection, Exit From The Matrix, is designed to increase an individual’s power to make realities of his own choosing.

The author of three explosive collections, THE MATRIX REVEALED, EXIT FROM THE MATRIX, and POWER OUTSIDE THE MATRIX, Jon was a candidate for a US Congressional seat in the 29th District of California. He maintains a consulting practice for private clients, the purpose of which is the expansion of personal creative power. Nominated for a Pulitzer Prize, he has worked as an investigative reporter for 30 years, writing articles on politics, medicine, and health for CBS Healthwatch, LA Weekly, Spin Magazine, Stern, and other newspapers and magazines in the US and Europe. Jon has delivered lectures and seminars on global politics, health, logic, and creative power to audiences around the world.

You can find this article and more at Jon's Outside The Reality Machine.
Posted by SATHYA at Wednesday, February 15, 2017